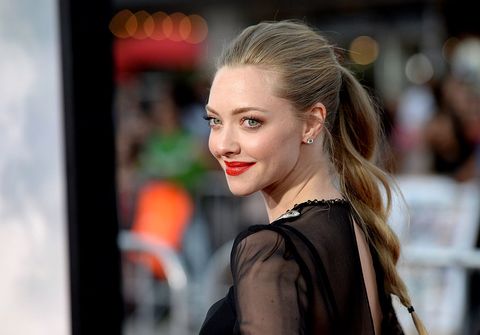 Amanda Seyfried has opened up about living with obsessive compulsive disorder, and the stigma that still exists around taking psychiatric medication.

"I'm on Lexapro, and I'll never get off of it," Seyfried told Allure, revealing that she has been taking the drug for 11 years. "I'm on the lowest dose, and I don't see the point of getting off of it. Whether it's placebo or not, I don't want to risk it."

"What are you fighting against?" she asked. "Just the stigma of using a tool?" Although mental illness is often regarded as being in a different category than other illnesses, Seyfried pointed out that "it should be taken as seriously as anything else…If you can treat it, you treat it."

Seyfried, whose notable projects include Mamma Mia!, Les Misérables, and Showtime's upcoming Twin Peaks revival, went on to describe the health anxiety that stems from her OCD.

"I thought I had a tumor in my brain…I had an MRI, and the neurologist referred me to a psychiatrist," she said. "Knowing that a lot of my fears are not reality-based really helps."

Emma Dibdin Contributor Emma Dibdin writes about television, movies, and podcasts, with coverage including opinion essays, news posts, episodic reviews and in-depth interviews with creatives.
This content is created and maintained by a third party, and imported onto this page to help users provide their email addresses. You may be able to find more information about this and similar content at piano.io
Advertisement - Continue Reading Below
More From Celebrity
Iconic Party Photos From the Past
The Best TV and Movie Wedding Dresses of All Time
Advertisement - Continue Reading Below
40 Celebrity Sisters Who Look So Much Alike
40 Rare Photos of Grace Kelly Through the Years
A Look at Royal Family Portraits Through the Years
The 50 Most Popular Episodes of ‘Friends,’ Ranked