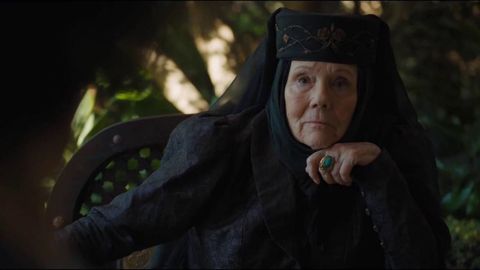 Game of Thrones has brought us a lot of strong female characters. Daenerys, Cersei, Arya, Sansa, Lyanna, Margaery, and Yara get a lot of the credit, but the true HBIC in Westeros is Olenna Tyrell (or, as I like to lovingly call her, Nana Tyrell) and we all know it.

She looks down on the younger generations of women vying for power and she audibly scoffs because she's so powerful and amazing, she usually just doesn't give AF. But in one recent deleted scene, she definitely gave AF. She gave all the Fs, in fact, as she plotted to take down Cersei and the rest of the Lannisters. And did we mention that, according to Time, this scene is from the second episode of last season? So Nana Tyrell has been wise to the way things were going for a while.

"We will get them back," she says to Mace Tyrell in the clip. "And we will leave this miserable place, and let the Sparrows and Lannisters rip each other to pieces."

If only her plan had worked (RIP, Margaery, Loras, and Mace Tyrell). But the good news is, there are three more deleted scenes from last season on the upcoming Blu-ray and DVD releases of the season. Here's hoping they're all Olenna Tyrell scenes.