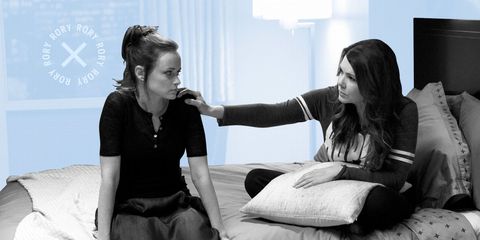 At the age of 15, Rory Gilmore was full of promise and potential—or at least that's what we were told by literally everyone on the show. Gilmore Girls wanted us to think Rory was smart, hard-working, kind, loyal, and true. And while we do see glimpses of those traits, especially in the first few seasons, we also see Rory's warts—her narcissism, selfishness, and impulsiveness—all of which become painfully apparently when she does things like lose her virginity to her married ex, steal a yacht, or drop out of Yale.

In 2007, Gilmore Girls ended with Rory on a promising path (the Obama campaign, anyone?), and there was reason to hope that A Year in the Life would give us a more mature, nuanced version of her. But it didn't. It so didn't.

The Gilmore Girls revival gets a lot of things right (Lorelai and Luke's very believable and mostly drama-free relationship, everything Emily does, Michele's open sexuality and happy marriage, etc.), but Rory's storyline feels like revenge. What did this bookish "perfect" girl do to ruin Amy Sherman-Palladino's life, and why is she taking that rage out on a fictional character?

Revival Rory is a walking, talking regression—making choices that might have been relatable at 22, but are downright unforgivable a decade later. Let's get started.

The Paul Thing is one of the most unforgivable aspects of 2016 Rory. We meet Paul in the revival's first episode, and learn that he and Rory have been dating for two years. No one in the Gilmore-Danes household can remember the poor guy (including Rory), but it's clear that he's in it. He fixes Lorelai's computer, he brings Luke an antique wrench—all small efforts that show how much Paul cares about Rory.

The running joke is that Paul is forgettable. Rory has been "meaning to" break up with him, presumably for years now, but never seems to remember. So she doesn't break up with him. Instead, she cheats on him, repeatedly and with multiple people (Logan, mostly, but also a Wookie). Rory's treatment of Paul is callous and cruel.

Speaking of Logan, let's talk about that affair. While Rory's busy cheating on Forgettable Paul, Logan's cheating on Very-Much-Remembered Odette, his fiancée. If you thought Rory had learned a lesson about being the other woman from that Dean debacle, you'd be wrong. She never shows any remorse about the affair or how it might affect Odette. The only thing she seems to feel for her rival is annoyance—especially when poor Odette decides to move in with her future husband, which inconveniences Rory and the logistics of her affair.

As terrible as the decisions Rory makes in her personal life are, her career trajectory might be even more disappointing. Rory has always had great things fall in her lap, perhaps most notably when she was made editor of the Yale Daily News for no good reason.

Rory's luck must have held, as assignments from prestigious publications like The Atlantic and The New Yorker seem to fall from the sky during A Year in the Life. When we meet Rory, she's rambling about irons in the fire and waiting for Condé Nast to call her. She's not hustling. She's not reaching out to editors. She's not pitching stories. She's not engaging in the work she does have. She's not even trying.

Even though Rory is entirely lackluster, she still gets to write a print story for GQ, which, to be clear, is an opportunity many hard-working journalists dream of. During the course of reporting said story, Rory falls asleep during an interview with one source, and then has a one night stand with another. The whole ordeal makes it clear that Mitchum Huntzberger made the right call all those years ago: Rory just doesn't have what it takes to be a journalist.

Sandee Says and the Epitome of Rory Gilmore's Narcissistic Privilege

After Rory decides to bail on the GQ story, Lorelai convinces her to take a meeting with Sandee Says, a website that's been courting her for the better part of a year. It's not entirely clear which real-life website served as the inspiration for Sandee Says, but it is clear that Rory thinks she's too good to write for them—though she deigns to come in for an interview.

When the site's Editor-in-Chief throws her curveballs like "what are some things you'd like to write about?" Rory is completely unprepared. She expected to be handed the job outright and says (actually screams) exactly that to said editor.

After her disaster of an interview, Rory moves back home (but refuses to acknowledge that she has) and saves the Stars Hollow Gazette from closure by volunteering to step in as editor. It's the saddest of all of Rory's story lines in the revival, and paints a perfect picture of exactly what giving up looks like.

Jess to the Rescue

So, what gets Rory out of her rut? Is it her moxie? Her chutzpah? Is it a meaningful talk with one of the strong female role models she has? Is it fate stepping in and forcing her in the right direction? Nope.

It's Jess. Jess-effing-Mariano assesses Rory for 30 seconds after having not seen her for four years, and tells her she should write a book. He even tells her the plot of said book. And she's like, "Yeah, I'll do that." 😐

Rory decides to write a book about her mom (after all, her own life has not been particularly memoir-worthy), and when Lorelai understandably isn't on board with her child co-opting her story, Rory throws a fit. She can't understand why Lorelai, who has generally sacrificed everything for her happiness, is finally putting her foot down. And are we surprised? Rory's quest for validation at the expense of others never ceases to amaze.

A Year in the Life ends on the famous Final Four Words that creator Amy Sherman-Palladino always intended to close the series with: a pregnancy announcement. It would have felt like a full circle moment if the show had ended when Rory was in college, but it's a huge miss for Revival Rory—which brings us to the revival's core issue:

A Year in the Life strives to make Rory too much like 16-year-old Lorelai. She and Logan could just leave their respective partners and be together (since they're clearly still crazy about each other). But if that happened, Logan couldn't be Rory's Christopher. And Rory could be a good, successful journalist. But if that happened, she wouldn't need to run away to Stars Hollow.

While that symmetry might have been poignant in 2007, it doesn't work in 2016. Rory is a 32-year-old woman forced at every turn to behave like a 16-year-old girl, which is a disservice both to the character and the viewers who loved her.