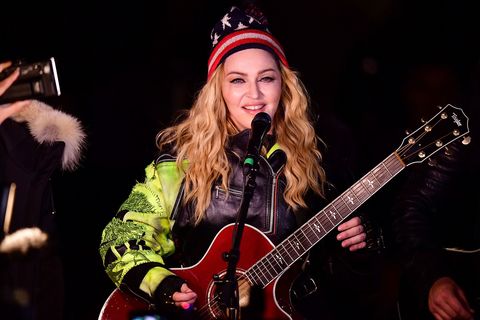 Madonna was one of the many celebrities who joined the historic Women's March over the weekend. But unlike other celeb attendees, the singer is facing some *serious* backlash over a controversial quote.

ICYMI, Madonna gave a fiery speech at the Women's March in Washington—a speech that included the line: "I have thought an awful lot about blowing up the White House." Not only was that not the vibe the Women's March was going for, but the decidedly anti-America sentiment has caused a lot of criticism.

HITS 105, a radio station in Texas, has banned Madonna's music in response to her speech, according to Billboard. "Banning all Madonna songs at HITS 105 is not a matter of politics, it's a matter of patriotism," Terry Thomas, the general manager of HITS 105, said in a statement. "It just feels wrong to us to be playing Madonna songs and paying her royalties when the artist has shown un-American sentiments." And while it's unclear how often HITS 105 actually played Madonna's music, their stance is clear and Thomas encouraged other radio stations to follow their lead.

Madonna has since apologized for her words on her Instagram, which is now set to private. "I am not a violent person, I do not promote violence and it's important people hear and understand my speech in its entirety rather than one phrase taken wildly out of context," Madonna wrote according to Time. "I spoke in metaphor and I shared two ways of looking at things—one was to be hopeful, and one was to feel anger and outrage, which I have personally felt."

Watch Madonna's entire speech below. The 😳-inducing quote starts at the 4:14 mark.

Maggie Maloney Associate Digital Editor Maggie Maloney is the associate editor at Town & Country and ELLE Decor, where she covers style, beauty, jewelry, and the many members of the royal family.
This content is created and maintained by a third party, and imported onto this page to help users provide their email addresses. You may be able to find more information about this and similar content at piano.io
Advertisement - Continue Reading Below
More From Celebrity
Meghan Markle Looked Gorgeous at Global Citizen
Harry and Meghan Are Taping Their NYC Trip
Advertisement - Continue Reading Below
Keep an Eye on Lady Louise Windsor
Princess Beatrice's Daughter May Get a Royal Title
James Middleton’s Wife Thought He Was a Waiter
Meghan Markle Got a New Nickname
Harry Said the Queen and Philip Were "Adorable"
Kate Middleton Played Tennis With Emma Raducanu
Tom Felton Collapsed on a Golf Course
Ashley Olsen Made a Rare Red Carpet Appearance