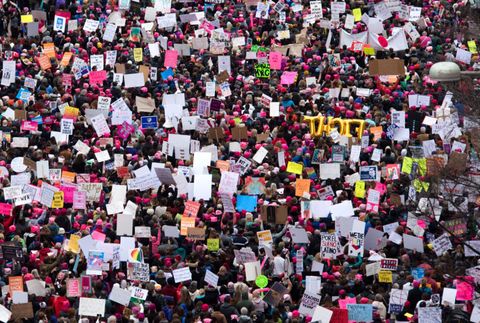 Turnout for the Women's March on Washington and its sister marches around the world may have been even greater than we initially thought: According to FiveThirtyEight, the total number of marchers in the United States alone was likely close to 3.2 million, making this one of the largest mass protests in American history.

Interestingly but perhaps not surprisingly, attendance for the protests followed the same geographic trends seen in the 2016 election results—about 80 percent of the march attendees were in states that Hillary Clinton won.

The total number of marchers in the United States alone was likely close to 3.2 million, making this one of the largest mass protests in American history.

Pinning down exact numbers for events like the women's marches is almost impossible, but FiveThirtyEight offered backup for its estimates, including sourcing for the raw data and a percentage discount for data that came from potentially biased or exaggerated sources. Numbers provided by event organizers, for example, were discounted by 40 percent.

The biggest marches took place in D.C., Los Angeles, and New York City. The events in these cities also featured performances and speeches by celebrities and well-known feminist figures, including a particularly moving speech by Gloria Steinem in Washington, D.C.:

The Women's March has drawn comparisons to the Tea Party rallies in 2009. But using similar techniques, FiveThirtyEight estimates that those rallies drew just 310,000 participants across 350 cities.

The high turnout for the women's marches is encouraging at a time when a lot of Americans (both women and men) need to feel encouraged about the political future. The next step? Maintaining that momentum from here on out.