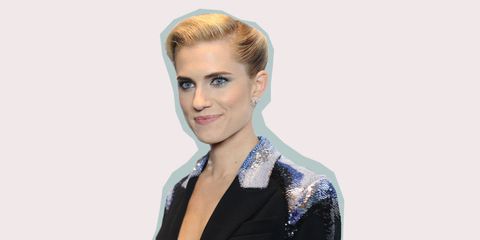 Allison Williams knows you'll be talking about Get Out long after you see it. In fact, she's counting on it. That's the whole reason the actress signed on to star in Jordan Peele's horror thriller about a black man who visits his white girlfriend's suburban home and discovers that the family's idyllic life is not what it appears to be.

Early in the film, we learn that although Williams' character seems pretty attuned to the racial prejudices her boyfriend faces as a black man in America, she might not be all that enlightened.

The Girls star—who wrapped filming on her HBO series last year—spoke to MarieClaire.com about her first feature film experience, embracing intersectional feminism, and examining her own privilege as a white cis-gender woman in America.

On examining her own privilege:

"I've been thinking about it for a long time. I've been very aware of it and very aware of the limitations of empathy. Trying to imagine what it's like to be someone else is never a substitute for actually living that way, for acknowledging the respect that we need to have for each other's experiences. I was lucky to be raised by people who were very intent on making sure that I understood all of that from an early age, and have spent the majority of my adult life trying to level the playing field to reduce the inherent inequities that come with being from such a place."

On the pressure to use her position for activism:

"I would never tell someone else how to use their platform because I think I'm much more comfortable allowing the work that I do to speak for itself. In most cases no one asks what I think, and so for me to be ready to volunteer it unprompted, I have to feel very ready to accept whatever is coming next. I feel in many ways that I'm still in the data collection phase. It may be a little while before I take the megaphone in the way that Lena has, but we will see. TBD."

On wanting to spark a conversation about race:

"One of the things Jordan was thinking about while making the film is: maybe race can be best thrust into conversation from a genre that feels very unfamiliar. Showing Get Out to a room full of strangers and having them react lets them be introspective and see the way certain images affect other people. It's a really important thing for a group to experience together."

On the film arriving during the Trump administration:

"Maybe it's perfect timing. Everyone is very on edge right now, everyone is feeling a little bit raw. The movie could be a little bit more volatile then it would be otherwise. Either way, it's going to be very, very interesting."

Get Out hits theaters February 24.

This content is created and maintained by a third party, and imported onto this page to help users provide their email addresses. You may be able to find more information about this and similar content at piano.io
Advertisement - Continue Reading Below
More From Celebrity
Beyoncé Stuns in a Mesh Dress With Matching Gloves
Lizzo and Chris Evans Had the Best IG Interaction
Advertisement - Continue Reading Below
Travis Shared PDA-Heavy Bday Tribute to Kourtney
How the Queen Ends Awkwardly-Long Handshakes
The Queen Has a Rule Against Bad Talking Family
The Queen Took a Pic of Philip With Her to Funeral
The Queen's Tolerance Was the Key to Her Marriage
J.Lo "Likes" Shady IG Post After A-Rod Split 👀
Beyoncé Shares Photos of Her White Power Suit
Will & Kate Welcomed Harry Back Into Their Group