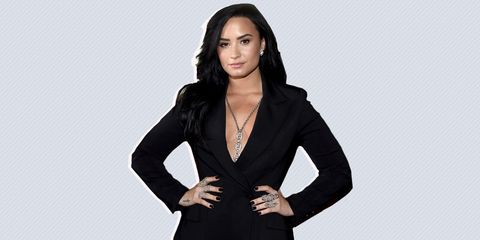 No matter what Donald Trump has to say on the matter, Demi Lovato is proof that celebrities can and should use their platform to speak about political and social issues—especially when those issues are as important as mental health. The stigma surrounding mental health is unrelenting and dangerous, and Lovato (who has bipolar disorder) wants to change that. We spoke to Demi about her personal mental health experiences, maintaining privacy, and her appreciation of fellow advocate Kate Middleton.

"It's so important to be vocal about the things you're dealing with—you never know the life you could live if you're sharing your experiences with others."

"There's a stigma surrounding mental health issues because nobody talks about it. When you spread awareness and create conversation, that's when you realize mental health conditions aren't anything out of the norm. They're very common. They shouldn't be judged. They should be accepted."

Sacrificing Privacy About Her Own Mental Health Issues = Worth It

"I live a public life. When I was first diagnosed with bipolar disorder, I knew it was something that may or may not get out. But when I was faced with the decision about whether to discuss it, I thought I might as well use my voice for something greater than singing."

Demi Lovato speaks at the Capitol Hill Reception as part of her Be Vocal: Speak Up for Mental Health initiative.
Getty Images

"I had my parents and I had friends that were very supportive. Unfortunately, I kept a lot of things to myself, so the outcome wasn't as beneficial to me as it could have been. That's why it's so important to be vocal about the things you're dealing with—you never know the life you could live if you're sharing your experiences with others."

Mental illness affects millions but the photos out there just aren't showing the real picture. #BeVocalSpeakUp is looking to change that.

She's Inspired By Kate Middleton (Aren't We All?)

"It's incredible what Kate Middleton is doing. If we had more people over here doing that, maybe there would be less stigma in the United States."

"Anytime you aren't creating conversation about what mental health really is, you're opening it up to a bunch of negativity. It's important to remember that the vast majority of people living with mental health conditions aren't violent. They're ten times more likely to be the victims of a violent crime."