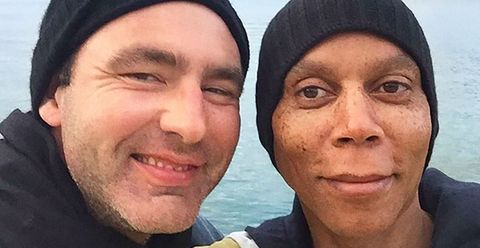 RuPaul just revealed for the first time that he's married to his partner of 23 years, Georges LeBar.

"I've never said this television before—we are married," he said on Hollywood Today Live. "I met him on the dance floor at Limelight in 1994 on his birthday. We got married this year on the anniversary of when we met."

The host of RuPaul's Drag Race has always kept their relationship private. And he's rarely seen in public with LeBar, who is a rancher based in Wyoming.

"He doesn't care about show business at all. He could care less," he told the hosts. "Most of the time, he's on the ranch in Wyoming. He has a 60,000-acre ranch—it's in two states, it's in South Dakota, too. When I go there, I dress up in Western wear and nobody cares."

So, what drew the drag queen icon to the camera-shy LeBar?

He told BuzzFeed in a 2015 interview: "He's so kind and funny. I remember praying, 'I want a sweet, sensitive man,' and I got an Australian who's just lovely."

After two decades together, the pair wasn't planning to wed. RuPaul told BuzzFeed of marriage: "No, I don't stand on ceremony, I never want to conform to anything. We looked into it if we could get a tax break and stuff but not because… Is he devoted to me? Am I devoted to him? Oh, hell yes. [But] I never want to be like everybody else."

He now says that after more financial discussions the couple changed their minds.

Kate Storey Esquire Writer-at-Large Kate Storey is a Writer-at-Large for Esquire covering culture, politics, and style.
This content is created and maintained by a third party, and imported onto this page to help users provide their email addresses. You may be able to find more information about this and similar content at piano.io
Advertisement - Continue Reading Below
More From Celebrity
J.Lo Reunites with A-Rod for Some Instagram PDA
Shop Meghan's Stunning $30 Summer Dress
Advertisement - Continue Reading Below
Duchess Kate Wears a Sleek Green Blazer
Meghan & Harry Update Archewell Website
Will Is in the Dark About Sussex/Oprah Interview
Oprah Says Her Sussex Interview Is Her Best Ever
Chelsea Handler Skied Naked for Her 46th Birthday
How Kristen Stewart Is Prepping to Play Diana
How to Make the Queen's Favorite Cocktail
The Queen Told Harry to Uphold His Family Values