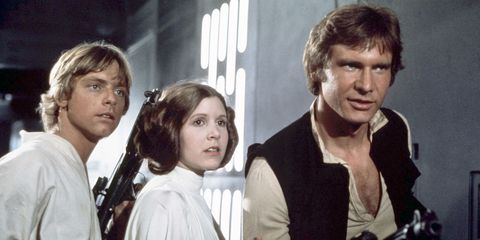 Carrie Fisher will not appear in Star Wars: Episode IX, in spite of recent reports indicating that she would. Earlier this month, the late actress' brother, Todd Fisher, told the New York Daily News that his sister would appear as her iconic character, Princess Leia, in the ninth installment of the Skywalker Saga.

"Both [Carrie's daughter, Billie Lourd, and I] were like, 'Yes, how do you take her out of it?' And the answer is you don't," he said, after explaining that Lucasfilm had approached Carrie's relatives about having her appear in the ninth film.

Apparently, however, this is not the case. Speaking to ABC News, Lucasfilm president Kathleen Kennedy said, "Sadly, Carrie will not be in Nine. But we will see a lot of Carrie in Eight."

Of Todd Fisher's comments on the subject, Kennedy said, "He was probably confused."

Kayleigh Roberts Kayleigh Roberts is the weekend editor at Cosmo, focused on celebrity news and royals.
This content is created and maintained by a third party, and imported onto this page to help users provide their email addresses. You may be able to find more information about this and similar content at piano.io
Advertisement - Continue Reading Below
More From Celebrity
Jennifer Aniston Answered Bizarre Fan Questions
Prince Charles "Really Wants to Meet" Lilibet
Advertisement - Continue Reading Below
Britney Spears Deleted Her Instagram Account
Megan Fox Won't Be Told "What a Woman Should Be"
Jennifer Garner Shared an Emotional Message on IG
Travis Scott Discussed His Parenting Style
Kanye West Unfollowed Kim Kardashian on Instagram
Kate Hudson Is Engaged to Danny Fujikawa
J.Lo & Ben Affleck Kiss in Masks at the Met Gala
Who Is Alexandria Ocasio-Cortez's Partner?