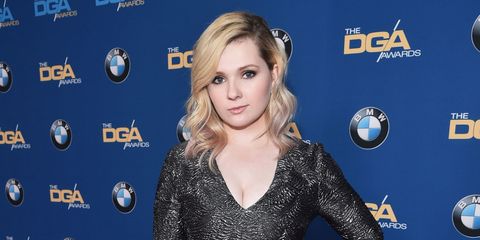 Abigail Breslin has been an outspoken advocate for survivors of sexual assault. Yesterday, she took to Instagram to share the story of why she didn't report her own assault and the points she made are so important.

It started when she shared an infographic from RAINN that detailed statistics about how many perpetrators of rape walk free.

Someone left a comment on the post that struck a chord with Breslin. "Reported rapes are the only rapes that count," the comment in question read. Breslin shared her own story to illustrate exactly why that's not the case.

In a two-image post captioned with a trigger warning, Breslin explained why she chose not to report her own assault:

"First off, I was in complete shock and total denial. I didn't want to view myself as a 'victim,' so I suppressed it and pretended that it never happened. Second of all, I was in a relationship with my rapist and feared not being believed. I also feared that if my case didn't lead anywhere, he would still find out and would hurt me even more. Thirdly, I knew how hurt my friends and family would be after finding out, and I didn't want to put them through that."

She went on to explain that she suffers from PTSD as a result of her rape and explained how the experience still impacts her life, years later.

"I have made a lot of progress since the event occurred, but I won't pretend it isn't something I struggle with. I still have flashbacks, I still get nightmares, I still jump when somebody touches me unexpectedly, even if it's my best friend tapping me on the shoulder."

It's incredibly brave of Breslin to share her experiences, especially to help educate people about such an important issue.