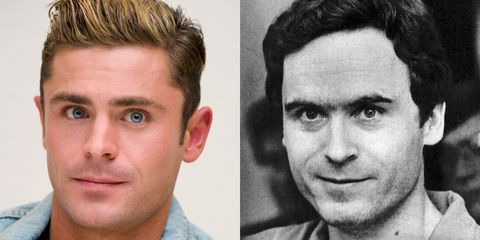 In news no one saw coming, High School Musical-turned-Baywatch star Zac Efron has been cast as Ted Bundy in a new film titled Extremely Wicked, Shockingly Evil and Vile. You know, Ted Bundy? The serial killer? Well if you didn't, you're about to:

Bundy Was a Rapist and Murderer

Bundy during his trial for the murder of 12-year-old Kimberly Leach.
Getty Images

Ted Bundy raped and killed dozens of women during the 1970s, and confessed to 30 homicides before being executed—though the number is said to be much higher. He decapitated some of his victims, and was even known to perform sexual acts on their dead bodies. In one of his most famous murders, he attacked four sleeping women at FSU's Chi Omega sorority.

He Was Notoriously Charming

Bundy waving to TV camera as his indictment for the murders of FSU students Lisa Levy and Margaret Bowman was read.
Getty Images

Bundy was considered handsome, and was infamous for luring in victims with his charismatic personality. He's said to have pretended to be injured or need help in order to gain women's attention and trust.

He Was Masterful at Evading the Law

Bundy at the Leon County jail in 1978.
Getty Images

Bundy managed to escape twice after being arrested and jailed. He was eventually given the death sentence, and died by electric chair in 1989.

He Had Several Serious Girlfriends

While at the University of Washington, Bundy met and began dating Stephanie Brooks. He later dated Elizabeth Kloepfer, and their turbulent on-again/off-again relationship will be the subject of Efron's new film. Bundy later married a woman named Carole Ann Boone, who had a baby she claimed he was the father of.

Suffice it to say this will be a disturbing movie.