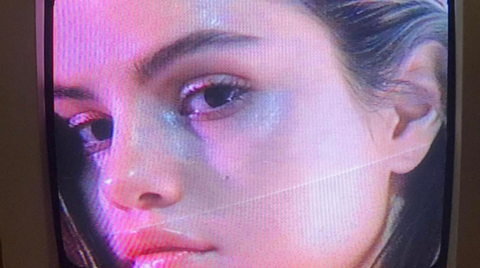 Selena Gomez has officially made her triumphant return to music with "Bad Liar," an extremely catchy new song with Talking Heads vibes (in fact, it was written over the baseline for "Psycho Killer"). And the video? It's intense.

Selena's been teasing the "Bad Liar" music video on Instagram, which seems to have been shot at the same time as her single art—i.e., right after she'd returned from hospital for Lupus.

All my feelings on fire... #BadLiarOutNow

In fact, you can see she's wearing her Fall Risk bracelet:

In terms of the song itself, co-writer Justin Tranter says, "The lyrics are really cool and descriptive about when you first start having feelings for someone, but don't want to admit it, which turns you into a 'Bad Liar.'"

Watch the full music video over on Spotify, and listen to the lyric video below.