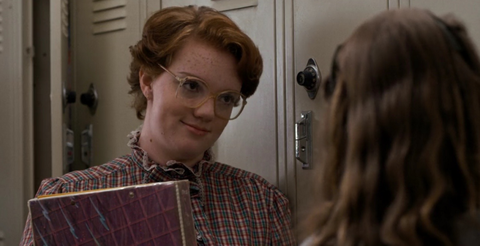 At the end of Stranger Things Season 1, fans had a lot of questions. Where did Eleven go? What's with those weird flashes to the Upside Down Will is experiencing? And, most importantly, when will there be justice for Barb?

Warning: Spoilers for Season 1 of Stranger Things ahead.

Barb was Nancy's best friend. She was a straight-laced girl with a good head on her shoulders and she was killed by the Demogorgon because she was out at a party with Nancy. She was also mostly forgotten immediately after her death. People obsessed about finding Will, who ultimately made it home alive, but there was almost no mention of Barb after her disappearance, leading fans to demand #JusticeforBarb.

And #justice we were promised.

At Comic-Con this weekend, we caught up with Stranger Things creators, the Duffer Brothers, and asked how they planned to deliver on that promise of justice for Barb.

"Well specifically, I will say that it involves Nancy and she's sort of the catalyst of it," Matt Duffer explained. "It was sort of a bittersweet ending last year. Will was returned but everyone didn't emerge from last year unscathed. There were these psychological after effects and Nancy is one of them who's hit the hardest and so we start with her and how she's dealing with it."

Shannon Purser, who played Barb, also made a surprise appearance at the show's Comic-Con panel, disguising herself as a fan and asking the first audience question of the afternoon. So just to be safe, we asked Purser what #JusticeforBarb means to her.