In light of President Trump's recent announcement to ban transgender individuals from serving in the military, James Corden did what he does best: Sang a song about it.

The Late Late Show host put on a top hat and tails and belted out his own rendition of Nat King Cole's "L-O-V-E." Corden's version, titled "L-G-B-T," showed love for the LGBT community and pointed out on some of Trump's biggest flaws thus far. Backed by dancers in sequined shorts and bowties, Corden waved a rainbow flag as he sang, "We thank you for your service. Yes, we've got love for all of you."

In the song, Corden declares his support for the transgender community and the LGBT community in general. In true Late Late Show fashion, Corden also poked fun at Trump along the way, calling out his infamously small hands and his desire to seem powerful and tough. "Trump wants to seem like a manly man, overcompensating for his tiny…hands."

Perhaps one of the best lines in the song, Corden asks, "How is their disruption worse than Trump's corruption?" Not only are Corden's vocals on point, but also he hits on some key facts that invalidate Trump's reasoning behind the ban, making this song our new summer jam. 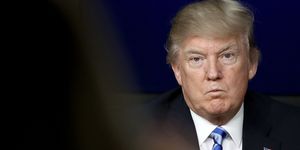