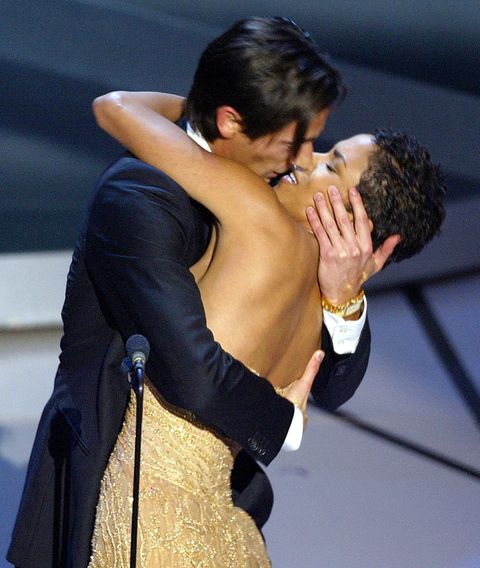 In 2003, Adrien Brody won an Oscar for The Pianist, and hopped up on stage to accept his award. Which would have been pretty standard procedure except for the fact that he grabbed presenter Halle Berry and gave her a giant kiss on the lips.

It was a weird moment (FYI, it's typically not a great idea for men to wander up to women and kiss them without asking first), and Halle Berry has some thoughts. During an interview with Watch What Happens Live! the actress said the following went through her head when Brody kissed her: "what the f*ck is happening right now!"

Berry also addressed recent speculation that she's pregnant, which was prompted by this photo:

"I was not holding my stomach. I was on the red carpet, doing my thing like boom, boom, boom. And I was like this," she said, putting her hands on her hips. "All the sudden, my arms are down, I thought 'I'm going to put my hands back on my hips.' So I go like this. And when I went like that, they went [*camera clicking noises*]. And so they got pictures of me going like this [edit: her hands are on her stomach at this point]....And so then, all these rumors started. I had a pretty big lunch. I had a burger and fries and I was a little poofed out....But this is what these tricky MF's do. They put up pictures and they make it like it's a moment, but that was not a moment. That was just in transition."