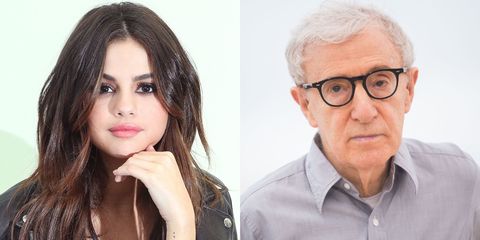 For some, Woody Allen has transformed from a beloved American icon to a person that inspires full-body cringing every time his name pops up in a headline. Yet Allen continues to attract a fleet of actors ready and willing to work with him—most recently, Selena Gomez, who's starring in his next movie.

In the event that you aren't already aware, Allen was accused of sexual assault by his daughter Dylan Farrow, who wrote about the alleged experience in the New York Times. He denied the claims in his own Times letter, but the allegations of abuse have also been discussed by other family members—including Ronan Farrow, who wrote an op-ed calling out celebrities for working with his dad.

And while some people are excited about Selena getting a well-deserved movie role (she is very talented, so good for her!), others are concerned about her decision to work with Allen.

selenation finding out that selena was going back to acting but then learnt about woody allen's past pic.twitter.com/5nF1hicLRr

selena gomez in a woody allen movie, jacob sartorius in jail, letterman back on tv and trump just invited north korea to nuke us... pic.twitter.com/viaZ1td1SZ

Selena joins the ranks of other young stars—including Miley Cyrus, Blake Lively, Kristen Stewart, and Jesse Eisenberg—who have worked with the controversial director.