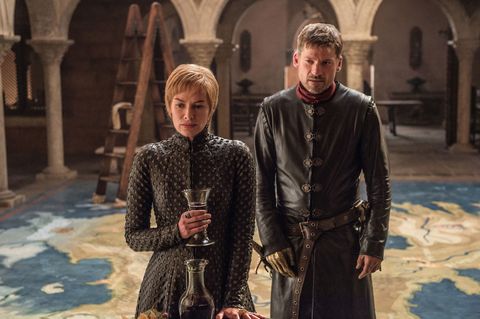 This week's Game of Thrones, "Eastwatch," contained some big reveals for the series. One of those was more direct than others: Cersei is pregnant.

This is big deal for several reasons. Let's break them down:

1. It means the Lannister line *could* live on.

The future of the Lannister line, like those many of the great families of Westeros, has been in question. Let's face it: None of the living Lannisters are super young. Tyrion seems to have given up on love after Shae (although, if we're being honest, he probably has several bastards running around from his, uh, previous relationships) and Cersei and Jaime seemed done procreating. Even though their other children are dead, they had lied about their paternity anyway, meaning they wouldn't have been recognized as Lannisters.

But now, since Cersei plans to be open about Jaime being the child's father, that could all change and the Lannister line could live on.

2. Cersei and Jaime are officially done hiding their love.

Cersei already wasn't being particularly discrete (in her defense, she's the queen—what is anyone going to do about it?), but if she tells people Jaime is the child's father, that's the end of the open secret.

This isn't the end of the world. The Targaryens married brothers and sisters for generations, so it's not like the idea of incestuous rules is so foreign to the people of Westeros.

In Season 5, we were treated to a flashback in which a young Cersei Lannister visited a witch who gave her a prophecy about her future children—specifically that she would have three children, who would all die. So far, that's come true—Cersei has outlived Joffrey, Myrcella, and Tommen. The witch's prophecy didn't say anything about a fourth child, which could be bad news for the unborn baby and/or Cersei herself.