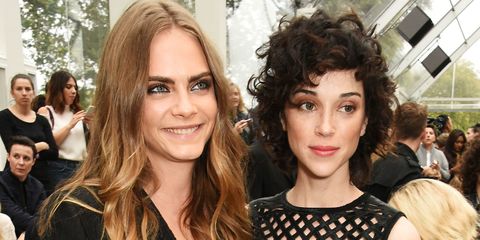 St Vincent has discussed the difficulty and the scrutiny that comes with dating someone as famous as Cara Delevingne.

The two were together for 18 months before breaking up last summer. Having kept a relatively low profile prior to their relationship, St Vincent, real name Annie Clarke, was thrust into the limelight.

She saw first-hand what it was like for someone she loved to be "hounded, hassled, hacked–all of that stuff".

"Having seen certain levels of fame, having been, y'know, fame adjacent... That in and of itself seems very hectic to me," she told the Guardian. "If it's a natural byproduct of doing what it is you love? Then great. But there are certain levels of fame that I've seen, just by proxy, that are unenviable."

Speculation has begun rising whether or not she'll reference her former girlfriend in her new album, which is due for release shortly. The official line? She remains cryptic, but will "write about her life".

"I can't help but be living and also taking notes on what's going on, always trying to figure out how to put that into a song," she said. "And that does not mean there's literal truth in every lyric on the way. Of course not. But I can only write about my life, and that–dating Cara–was a big part of my life. I wouldn't take it off-limits, just because my songs might get extra scrutiny."

Clarke is also working on a film adaptation of The Picture of Dorian Grey, starring a woman in the title role.

This content is created and maintained by a third party, and imported onto this page to help users provide their email addresses. You may be able to find more information about this and similar content at piano.io
Advertisement - Continue Reading Below
More From Celebrity
Meghan and Diana Had Similar Issues with the Queen
The Queen Insisted on Cutting a Cake with a Sword
Advertisement - Continue Reading Below
Harry Texted Kate, Not Will, When Lili Was Born
Kate's Kids Want Her to Stop Taking Their Pictures
SJP Posted Pics from the 'SATC' Revival Table Read
Kate Wore a Pearl Bracelet That Used to Be Diana's
Harry's HRH Title Was Removed from a Diana Display
Harry and Meghan Are Trying to Keep the Peace
Olympia Wore a Mini Version of Serena's Unitard
Meghan's Mom Doria Ragland Is Helping the Sussexes