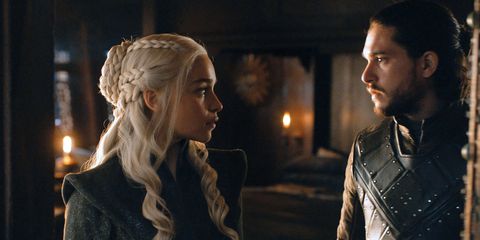 This post contains spoilers for Game of Thrones Season 7.

Season 7 of Game of Thrones has officially come to an end, and since we have so, so many questions after that bonkers finale, let the wild speculation about Season 8 begin. The fan theories and Reddit threads will surely spiral out of control between now and next season (which could be almost two years away, fun fact), but there are a few plot points that seem very likely, if not downright inevitable.

1. The Night King will be defeated.

Duh, right? Yeah, there are fans who would love to see the Night King sitting on the Iron Throne at the end of it all, but that won't happen. GOT's ending will almost certainly be bittersweet, but the "sweet" part will involve the Night King's defeat. Guaranteed.

2. But it will cost us at least one more dragon, maybe two.

Don't forget the bitter part though—the Night King has an ice dragon now, and the only way to fight blue magic fire is with lots of red magic fire. The remaining dragons are going to play a huge role in the war to come, and the likelihood of them both surviving is starting to seem slim.

When it comes to defeating the Night King, responsibility will fall squarely on the shoulders of the Prince (or Princess) That Was Promised. When Azor Ahai forged Lightbringer and defeated the army of the dead the first time around, he had to kill the love of his life to pull it off. Since Jon and Dany seem to be embracing their ahem, "love," for each other, we should all start preparing now for the possibility that one of them has to be sacrificed in order for the other to save the day.

4. Jon and Dany will be okay with the whole incest thing.

They'll struggle with it at first, but incest isn't a deal-breaker in the Game of Thrones world. What's more likely to come between them is the fact that Jon is the rightful heir to the Iron Throne. He probably won't even want it, if history has taught us anything, but it's still going to be awkward.

5. They will also procreate.

Too much was made of Daenerys' infertility for them to NOT make a baby. In fact, it's possible that the baby could bring them back together after a brief incest-related split.

According to Maggy the Frog's prophecy, Cersei will be killed by her little brother. She probably assumed that means Tyrion, but pretty much everyone's money is on Jaime doing the deed.

7. This will happen either before she gives birth, or after she miscarries.

Maggy the Frog also prophesied that Cersei would have three children, who would all die before her. Unless the entire Maggy the Frog scene was functionally worthless, Cersei will not have this baby.

Does anyone care about Theon Greyjoy's redemption arc? Nope? Well too bad, because Game of Thrones is determined to make Theon a thing. He's on a mission to save Yara and, in order to complete his redemption narrative, he'll probably die doing so.

9. Several of your other faves will meet their maker.

Anyone whose last name isn't Stark or Targaryen is super, super vulnerable at this point. Or maybe not, since Thrones doesn't actually kill anyone off anymore. But if producers get their nerve back and start taking characters out, anyone is fair game. Particularly vulnerable characters include all of the charming side characters you love most: like Tormund, Brienne, Bronn, The Hound, Varys, Melisandre, Missandei, Grey Worm, Sam, Ser Jorah, etc., etc. 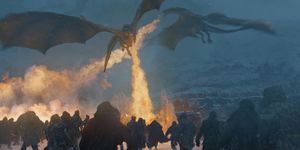 Did You Miss the Major Continuity Error in \'GOT\'?