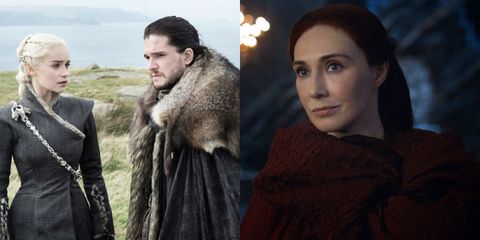 Let's be honest, there are lots of mysterious things about Game of Thrones (the White Walkers, secret Targaryens, the Three-Eyed Raven, the Children of the Forest, etc. forever). But one of the show's biggest and most impactful mysteries is the reincarnated identity of Azor Ahai. If you're reaction to hearing "Azor Ahai" is to feel dizzy and confused, keep reading.

Who was Azor Ahai?

Okay, let's just dive right in. In Game of Thrones lore, Azor Ahai lived thousands of years ago and saved the Seven Kingdoms from the Great Others—who were basically old school White Walkers. He used a flaming sword called Lightbringer to do this.

Okay, so what about The Prince That Was Promised? Are he and Azor the same person?

The Prince That Was Promised has a lot in common with Azor Ahai. He (or she) is prophesied to follow in Azor's footsteps and save the Seven Kingdoms with the help of Lightbringer. But deciding whether or not they're one and the same depends on your interpretation of the prophecies, and we'll get to them in a minute.

You keep talking about Lightbringer. What is that?

Lightbringer was Azor Ahai's magical sword. It gave off light/heat, and burned anything that touched it—which is handy when fighting an army of ice zombies. Forging Lightbringer was a huge undertaking, and something that's starting to play an important role in fan theories.

Legend has it that Azor Ahai worked on the sword for 30 days and 30 nights. Then it broke during the tempering process, so he had to start over. Next, he spent 50 days and nights making a new sword, and tried to temper it in the heart of a lion (because SURE). It broke again, but the third time was the charm. Azor worked on his new sword for 100 days and nights, and drove it into the heart of his beloved wife Nissa Nissa—combining her soul with the sword, and making it magical.

So someone is going to create a magical sword? Is there even time for that at this point?

When it comes to the modern-day GOT Lightbringer, it's still not clear if we're dealing with a literal sword, or if it's metaphorical. But, fans are already finding metaphorical parallels in the show's heroes. Dany, for instance, lost her first big battle this season on water, and lost her second at Casterly Rock—AKA lion-sigil House Lannister's heart.

How does this relate to the White Walkers?

Great question! If the prophecies are to be believed, The Prince That Was Promised will play a pivotal role in the battle against the White Walkers and the wights. So finding out this person's identity is key to everyone in Westeros surviving.

Okay, so what do these Very Important Prophecies say exactly?

There are two key prophecies about Azor Ahai/TPTWP in George R.R. Martin's books. Here's the first:

"There will come a day after a long summer when the stars bleed and the cold breath of darkness falls heavy on the world. In this dread hour a warrior shall draw from the fire a burning sword. And that sword shall be Lightbringer, the Red Sword of Heroes, and he who clasps it shall be Azor Ahai come again, and the darkness shall flee before him."

And here's the second:

"When the red star bleeds and the darkness gathers, Azor Ahai shall be born again amidst smoke and salt to wake dragons out of stone."

To recap: these prophecies are the clues we're working with to determine which character(s) are going to be able to lead the people of Westeros to victory against the army of the dead.

So which characters actually fulfill these prophecies?

The top contenders are, and have always been, Jon Snow and Daenerys Targaryen. Jon makes more sense from a plot standpoint (he actually believes in the White Walkers and he's dedicated to fighting them), but Dany fulfills the second prophecy's technicalities perfectly. She literally sat in a fire with her dragon eggs, emerged from the smoke, and was reborn as the Mother of Dragons. As for the first prophecy, Dany doesn't love swords, so if Lightbringer is a literal weapon, that's a strike against her.

Jon has a lot going for him too. He was literally reborn when Melisandre brought him back from the dead. And there's plenty of other Snow-centric imagery that fits the prophecy—for example, when Jon arrived into the world, Ned leaned Arthur Dayne's blood-stained sword over his bed. Since the sword was said to be made from a falling star, some people consider it the bleeding star from the prophecy. There are also fans who argue that the "waking dragons out of stone" section of the prophecy refers not to literal dragons, but to Jon himself—a secret Targaryen who has to realize that he's a dragon and not a stony Stark. Another point for Jon? In the books, Melisandre says, "I pray for a glimpse of Azor Ahai, and R'hllor shows me only Snow," which is admittedly huge.

There are other theories too, ranging from Jaime to Hot Pie being The Prince That Was Promised. Redditor Alutic has even created a handy chart that outlines the candidates if you're interested in that rabbit hole. 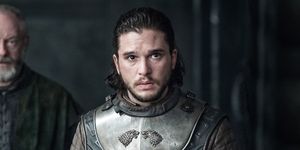 Who Are Jon Snow\'s Parents on \'Game of Thrones\'?

Kayleigh Roberts Kayleigh Roberts is the weekend editor at Marie Claire, covering celebrity and entertainment news, from actual royals like Kate Middleton and Meghan Markle to Hollywood royalty, like Katie Holmes and Chrissy Teigen.
This content is created and maintained by a third party, and imported onto this page to help users provide their email addresses. You may be able to find more information about this and similar content at piano.io
Advertisement - Continue Reading Below
More From Celebrity
Meghan and Harry Are Facing Security Threats
Selena Gomez Is Drenched in Fake Blood on Set
Advertisement - Continue Reading Below
Amanda Seyfried Talked About Having Panic Attacks
Harry Arrives in the U.K. For Philip's Funeral
Matthew Perry Deletes 'Friends' Reunion Instagram
The Queen's Corgis Are Helping Her With Her Grief
Charles is Looking Forward to Seeing Harry Again
Will & Harry to Walk Together at Philip's Funeral
Beyoncé Wore Tweed Micro Shorts for Date Night
Kristen Stewart's GF Gushed About Her on Insta