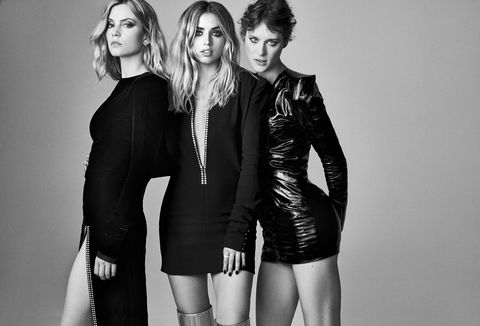 Blade Runner 2049 hits theaters on October 6. But you already knew that. The film is the biggest box-office phenomenon of the fall, and it hasn't even reached the box office yet. And, odds are, you've already seen the trailers (together they've earned more than 20 million views and counting on YouTube), so we don't have to tell you that while the future may not exactly be bright, it does look sufficiently badass—thanks, in large part, to the dazzling lineup of relentless women, including Mackenzie Davis, Ana de Armas, and Sylvia Hoeks, who drive the film's plot in a blaze of fearless, special-effects-enhanced glory.

The much-anticipated sequel picks up where Ridley Scott's 1982 dystopian classic, Blade Runner, left off, give or take 30 years. And the update (directed by Arrival film- maker Denis Villeneuve and executive-produced by Scott) will immerse moviegoers in a breathtaking futuristic world that will no doubt be as influential on fashion, beauty, and art as the stylish sci-fi original's was. (See: Sean Young's over-the-top fur coat, Joanna Cassidy's clear rain jacket, and Daryl Hannah's extreme smoky eyes.) But the best part, of course: The women are bringing to life multidimensional, complex characters...even if they're not all flesh and blood.

To prepare for her role as Luv, the bone-chillingly fierce lieutenant to Jared Leto's villain, Neander Wallace, Hoeks, the 34-year-old Dutch actress making her major U.S. debut, trained with a champion triathlete six hours a day, six days a week, for three months, gaining more than 15 pounds of muscle. "It was very freeing not to have to lean on my femininity or my sexiness," she says.

"It was very freeing not to have to lean on my femininity or my sexiness."

"In another movie, our roles would be restrictive or stereotypical, but here, they don't actually constrict our range of actions and abilities in the film," adds Black Mirror actress Davis, 30, who plays a sex worker (and possible replicant, aka android) named Mariette. "So it's not like, 'She's a sex worker; she's a girlfriend.' They occupy this whole world that isn't limited to the fact that they use their bodies in this way."

Since the beginning, Warner Bros. has had the entire production on total lockdown, which turns talking to Hoeks, Davis, and de Armas into a game of 20 Questions. De Armas, the 29-year-old Cuban actress who plays Joi, the romantic counterpart to star Ryan Gosling's Officer K, answers a question or two with just a theatrical squirm, making a face like she's choking down a secret.

But Davis does let one clue slip: The scene each was asked to read at her first audition points to how her character fits into the 2049 story. Davis read a Blade Runner scene as the sequined, street-savvy exotic dancer Zhora, whose rainy "retirement" by gunfire is now regarded as one of the most iconic death scenes of all time. "Blade Runner is my favorite movie, and I didn't want to be a part of something that was going to destroy that legacy," Davis says. "But this feels like there was more story to be told—it felt motivated by art." Hoeks did a scene from the original, too, as Roy Batty, the rebellious replicant hunted by Harrison Ford's Rick Deckard. De Armas, meanwhile, got something different altogether: For Joi, whom she describes as "unexpected, a surprise, in a way," she auditioned with a scene from the 2014 film Ex Machina as Ava, the intelligent android who manipulates the men holding her captive in a lab into helping her escape.

So will the replicant women be rising up against their human oppressors? This time, de Armas doesn't hesitate: "The future is female. That's all I'm saying."

This article appears in the October issue of Marie Claire, on newsstands September 19.

This content is created and maintained by a third party, and imported onto this page to help users provide their email addresses. You may be able to find more information about this and similar content at piano.io
Advertisement - Continue Reading Below
More From Celebrity
Gigi Hadid Shared a Selfie With Her Daughter
Diana's Brother Wants 'The Crown' to Warn Viewers
Advertisement - Continue Reading Below
Chrissy Said She's In a "Grief Depression Hole"
Taylor Said Joe Co-Wrote Two Songs on 'Folklore'
J.Lo Bares Her Body On Instagram
NYE Outfits to Get You Into the Countdown Spirit
Beyoncé Now Has a Staggering 79 Grammy Nominations
Chrissy and John Spoke About Grieving Baby Jack
Meghan Markle Revealed She Had a Miscarriage
Jewel's Jewelry Collection Is Eclectic and Fun