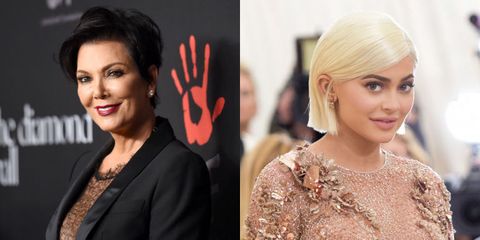 Unless you've been in a temporary coma for the last 24 hours, you probably already know that rumor has it that Kylie Jenner is pregnant.

While neither Kylie nor the rumored child's rumored father, Travis Scott, have addressed the story directly, several outlets have reported that "unnamed sources" close to the family have confirmed the news. We have to take that like we take any story confirmed only by unnamed sources—which is to say, with a grain of salt.

Now, a member of the Kardashian clan has opened up about the rumor...kind of. At Milan Fashion Week, Kris Jenner, momager extraordinaire, gave The Cut a very cryptic quote about the whole situation.

"Something happens every single day," Kris said. "You never know what is going to break at any moment."

She also noted that Kylie hasn't confirmed anything, but stopped short of saying anything that actually denied the rumors directly. These ladies know how to work a news cycle.

Kayleigh Roberts Kayleigh Roberts is the weekend editor at Cosmo, focused on celebrity news and royals.
This content is created and maintained by a third party, and imported onto this page to help users provide their email addresses. You may be able to find more information about this and similar content at piano.io
Advertisement - Continue Reading Below
More From Celebrity
Meghan Markle Might Not Ever Go Back to the UK
Are Angelina Jolie and The Weeknd Dating?
Advertisement - Continue Reading Below
Kate and Will Ate Burgers With Their Kids
Meghan Markle's Handbag Was a Nod to Diana
Ben Affleck and Jennifer Lopez Made Out in NYC
Lady Gaga Stunned in an Old Hollywood Look
Olivia Rodrigo Looked Jaw-Droppingly Beautiful
Will's "Alleged Bullying" Drove the Sussexes Out
Sam Asghari Opens Up About Britney Documentaries
Prince Harry’s Memoir Is Concerning Royal Insiders