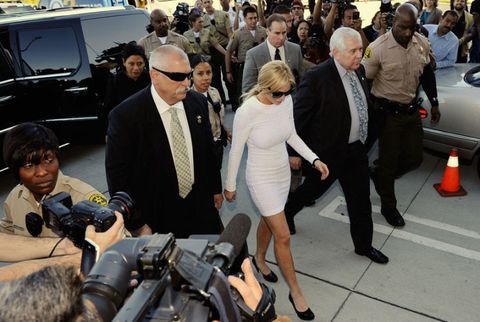 Have you ever stolen anything? One in 11 Americans has shoplifted — and companies are paying the price, losing more than $11 billion a year. Shoplifters often call their behavior an addiction or disease; not many call it a crime. Rachel Shteir, author of the new book The Steal, spent six years studying the psychology and history of shoplifting, dating back to 16th-century London, where anyone who stole an item worth more than 5 shillings was hanged. We asked her to break it all down.

Is shoplifting an addiction, or more of a compulsion?

I certainly met people who seemed unable to stop. Some said they get a thrill from it — they're in a store and there are all these objects beautifully displayed, calling out to them. It's exciting. Some said they had tried hypnosis, therapy, antidepressants, and still couldn't stop. I'm not a medical doctor, but I think "compulsion" might be a good word to describe it. Still, there are so many reasons for shoplifting. We want to put it in a category to try to make sense of it, but sometimes it's about a sense of loss or filling a void; other times it's something we use to distract ourselves from stresses. Often, shoplifters are caretakers of the elderly, dealing with sadness and stress. Or sometimes it's just high school girls who think it's cool.

What about the idea that shoplifting is all about greed?

It certainly drives some of the middle-class shoplifting, although I hesitate to call it greed, since wanting to acquire things is so widespread in our culture. That said, many people aren't stealing loaves of bread. Steak is the most stolen thing from supermarkets. Grocers go nuts about it. They believe middle-class customers do steal out of a sense of entitlement.

Yes, some people think shoplifting is trivial compared with what's going on in the world — with Madoff, on Wall Street. They think: Given everything else that's going on, what's the big deal? I've been stolen from myself; I'm owed this.

So it's not really about keeping up appearances?

I happen to believe that people shoplift steak because they would like a little extra for themselves, the way people buy a house that is out of their reach. I think of this as aspirational shoplifting.

Is the recession boosting stealing?

Since the recession, the number of people shoplifting in the U.S. has either held steady or increased slightly. But it's hard to measure shoplifting because it's the most underreported crime.

Can you go to rehab for shoplifting?

There are various kinds of programs — 12-step programs, group sessions that use workbooks. There aren't many studies on whether they work.

Does the desire to steal have to do with sex — or lack of sex — somehow?

The idea that kleptomania arises out of female sexual repression was taken up around 1906 by Freud's disciples. But experts aren't saying that anymore. That theory was abandoned in the mid-twentieth century.

What are some shoplifting tactics?

Some people steal things and try to return them for gift cards. Others use "booster bags" or "magic bags" — shopping bags with false bottoms. Some of these bags have a trapdoor at the bottom so the bag can rest on top of a pile of shirts and suck them inside, thanks to a hidden spring. You can't see the shirts from the top because of the false bottom. There are also booster aprons, bras, girdles. The girdles have special pockets that let you stuff clothes in there without creating lumps. Some people are using a hard ball that looks like a pregnant belly, and filling it up with hundreds of dollars of clothes.

Is shoplifting considered a felony?

Do security cameras work against shoplifters?

No. Studies show that they don't, although there are some quite sophisticated cameras now. Usually when they're first installed, there's a slight decrease in shoplifting, but then it goes back up to a normal level. People get used to the technology and make adjustments. For instance, they'll team up with a partner and have one person stand in a way that blocks the theft from view.

What are the latest ways to combat stealing?

Some judges have tried shaming — sentencing shoplifters to stand in front of a store wearing a sign that says something like, "I stole from Walmart." It seems archaic, but shame is the secret terror of some shoplifters. In Europe, there's a company called Internet Eyes that enables stores to stream surveillance video into people's homes. When viewers see a shoplifter, they push a red button. The person who catches the most people every month gets a payout.

What do women steal most? And men?

So did Lindsay Lohan steal that necklace or what?

I don't think from the video I've seen that you can tell. To me, what's more striking about this case is that the store sold the surveillance video to the media. It seems insane. If the point is to prove that she's guilty, I don't think that will help them. It seems craven, like it's more about the store than her. One thing is certain: If this goes to trial, it'll be a circus.

To preorder The Steal, go to amazon.com.

Abigail Pesta Abigail Pesta is an award-winning journalist who has lived and worked around the world, from London to Hong Kong.
This content is created and maintained by a third party, and imported onto this page to help users provide their email addresses. You may be able to find more information about this and similar content at piano.io
Advertisement - Continue Reading Below
More From Celebrity
William Will Suffer "Worst" from Harry's Memoir
Simone's Boyfriend Sent Her the Sweetest Message
Advertisement - Continue Reading Below
Harry's Friends Don't Want to Be in His Memoir
Will & Kate's Modern Approach to Raising George
Meet Simone Biles's Super Supportive Parents
What Happens on Katie's Season?
Bennifer Recreated Their 2002 PDA Moment
Why Harry's Memoir Release Date Has Upset People
The Royals Are Worried About Prince Harry's Memoir
Gabrielle Union Debuted a New, Short Haircut