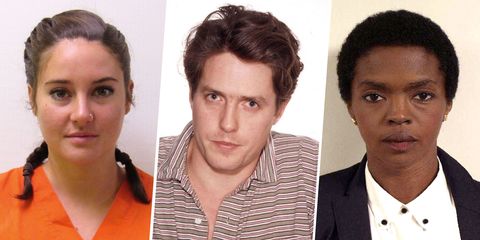 The O.C. star was arrested for a DUI and drug possession while driving in West Hollywood in December of 2007. "That was a low point for me," she said. "I never, ever would have thought I would be arrested."

Actress Jane Fonda was arrested at a Cleveland airport on November 3, 1970 while on her way back from speaking at a Vietnam War fundraiser. She was wrongfully accused of drug smuggling. "They discovered a large bag containing little plastic envelopes marked (in red nail polish) 'B', 'L', 'D'–signifying breakfast, lunch, and dinner—that contained the vitamins I took with each meal," she explained in a blog post. "They confiscated that as well as my address book (which was photocopied) and arrested me for drug smuggling." You can buy a mug with Jane's mug shot on it over on her website.

The ever-iconic Lauryn Hill was arrested in 2012 after failing to pay taxes. "Over-commercialization and its resulting restrictions and limitations can be very damaging and distorting to the inherent nature of the individual," she said around the time of her arrest. "I did not deliberately abandon my fans, nor did I deliberately abandon any responsibilities, but I did however put my safety, health and freedom and the freedom, safety and health of my family first over all other material concerns! I also embraced my right to resist a system intentionally opposing my right to whole and integral survival."

Fiona Apple was arrested in September 2012 in Texas, when police claimed they found hash in her tour bus. She was released after posting a $10k bond, and a few days later addressed the arrest in concert, calling out officers for "inappropriate" and "probably illegal" behavior: "I want you to know that I heard everything you did. I wrote it all down with your names and everything you did and said, stupidly thinking that I couldn't hear or see you."

Actor Josh Brolin was arrested on New Year's Day 2013 for public intoxication in California. He had a pretty good attitude about it, saying "New Year's—that's what happened. I'm the one guy who's out there, and they go, 'Hey, there's Josh. Let's grab him.' You know, it was New Year's. It was a pretty innocent thing. It was a fun thing."

Back in 2016, Reese Witherspoon was arrested for disorderly conduct while in the car with her husband, who was arrested for a DUI.  "I saw [the police officer] arresting my husband and I literally panicked," she told Good Morning America. "I said all kinds of crazy things. I told him I was pregnant. I'm not pregnant! I said crazy things. You only hear me laughing because I had no idea what I was talking about and I am so sorry. I was so disrespectful to him. I have police officers in my family. I work with police officers every day. I know better."

While driving in upstate New York, Ferreira was arrested for possession of a controlled substance and resisting arrest. "I kind of got fucked with," she told Billboard. "And it's annoying because I wasn't charged with his heroin. It says it. The public records are out there. I wasn't charged with it. Trust me, if I was even anywhere near that, they would've charged me because they had no problem charging me with other shit."

Believe it or not, Matrix star Keanu Reeves was arrested in May of 1993 for a DUI. His hair was fabulous.

Before he was dating supermodels and singers, the Weeknd was arrested in January of 2015 for allegedly punching a cop. He was ordered to complete 50 hours of community service as a result.

Rob Kardashian's ex-girlfriend was arrested at a Texas airport in January 2016 for public intoxication and drug possession (specifically, ecstasy). But in a surprise romantic twist, Rob drove from L.A. to Austin to pick her up.

Big Little Lies actress Shailene Woodley was arrested while protesting the Dakota Access Pipeline in 2016. She filmed the experience on Facebook Live, saying "I don't know if you guys just heard me, but I was walking back to my RV, which is right there so that we can go back to camp peacefully and they grabbed me by my jacket and said that I was not allowed to continue. And they had giant guns and batons and zip ties and they're not letting me go."

McConaughey was arrested in Austin and charged with possession of marijuana and drug paraphernalia in 1999. When the police arrived at his home, they found him naked and playing bongo drums. "What's wrong with beating on your drums in your birthday suit?" he said of the arrest. "I have no regrets about the way I got there."

Home Improvement's very own Tim Allen was arrested for attempting to sell cocaine to an undercover officer in the 1970s, and spent more than two years in prison as a result. "It was a watershed moment," he said of the event. "It put me in a position of great humility, and I was able to make amends to friends and family, and refocus my life on setting and achieving goals."

Travis Scott was arrested in May of 2017 for allegedly inciting a riot during a concert, so naturally he pulled a Jane Fonda and started selling t-shirts with his mug shot.

Actress Heather Locklear was arrested in September 2008 on suspicion of driving under the influence.

The Biebs ran into some trouble in Miami circa 2014, when he was arrested for drunk driving, resisting arrest, and driving without a license during an alleged street racing session. "The police just wanted press. I never was speeding; I never was drag racing," he said of the incident. "The cop supposedly wanted to be famous for arresting celebrities, and someone had heard him say that prior to that. I wasn't drinking. I blew the thing and I had 0.01. I was like, 'Officer, what's going on? What did I do?' And he was like, 'Put your hands on the hood!' I was like, what? I lifted my hands and I was like, 'What do you mean, what's going on?' He was like, 'I told you, put your hands on the hood! Now you're under arrest for resisting arrest!' I was just like, 'Oh they're trying to get me right now at any cost.'"

Back in 1995, Hugh Grant was arrested with a sex worker for "lewd conduct" in a public place. "Last night I did something completely insane," Grant said in a statement. "I have hurt people I love and embarrassed people I work with. For both things I am more sorry than I can ever possibly say."

LaBeouf was arrested for public intoxication in Austin, Texas back in 2015.

If you cast your mind all the way back to 2006, you might remember that Nicole Richie was arrested for suspicion of driving under the influence thanks to the fact that she was allegedly driving the wrong way on a freeway. "Being ashamed of your life is not OK," Richie wrote of her past reckless behavior. "As much as I have to look at those moments and learn from them, as we all do, it's important for me to have gratitude for that time, too. Not shame."

Actress Michelle Rodriguez was arrested in 2007 for a probation violation. In a statement, the L.A. City Attorney's office said the following: "[She] admitted violating her probation by failing to provide proof of completion of her community service and for consuming alcohol three times while wearing an alcohol-monitoring device."

Downey Jr. has been arrested several times, but this is his mug shot from a circa 2001 arrest for being under the influence of a controlled substance.

The Dawson's Creek star was arrested in 2002 during a North Carolina hockey game, and charged with assaulting a security guard. Later, his ex-girlfriend Diane Kruger said her mother whipped out his mug shot and interrogated him about it: "I was translating. I thought we were doing so good. Then my mom goes, 'Ah, wait. I have something for you.' She goes into the office and comes back with this [plastic] folder of Internet clippings of Josh. With his mug shot."

Paris Hiton was arrested in Las Vegas for possession of a controlled substance (cocaine) in 2010.

In just one of several run-ins with the law, LiLo was arrested on July 20, 2010 after violating her probation.

She was also arrested in 2011 for probation violations.

As well as in July 2007 for drunk driving and cocaine possession.

Meanwhile, Lohan's ex DJ Samantha Ronson was arrested in 2011 for a DUI.

The youngest Kardashian daughter was arrested in 2007 for a DUI, and—amazingly—Kris Jenner keeps a photo of her mug shot in the house.

The Gossip Girl alum was arrested in 2016 for possession of marijuana. XOXO. 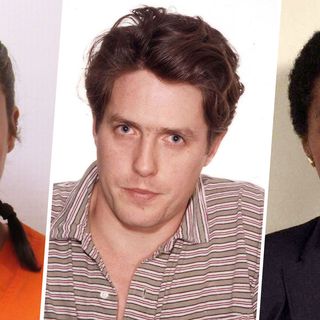 Advertisement - Continue Reading Below
Mehera Bonner Contributor Mehera Bonner is a news writer who focuses on celebrities and royals—follow her on Instagram.
This content is created and maintained by a third party, and imported onto this page to help users provide their email addresses. You may be able to find more information about this and similar content at piano.io
More From Celebrity
Meghan Markle Expresses Sympathies to the Queen
Prince Harry Remembers Prince Philip
Advertisement - Continue Reading Below
Prince William Statement on Prince Philip's Death
Meghan and Harry Are Facing Security Threats
Selena Gomez Is Drenched in Fake Blood on Set
Amanda Seyfried Talked About Having Panic Attacks
Harry Arrives in the U.K. For Philip's Funeral
Matthew Perry Deletes 'Friends' Reunion Instagram
The Queen's Corgis Are Helping Her With Her Grief
Charles is Looking Forward to Seeing Harry Again