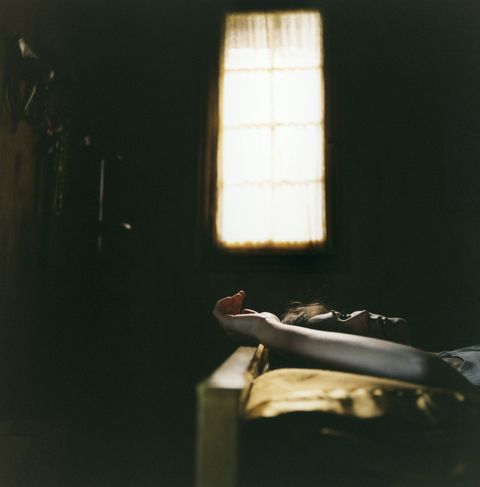 Piously, I was saving myself until marriage. I was always into books instead of boys. I carried no less than a 3.5 GPA. Though I was too tall for most of the guys still dealing with their own issues of pseudo-masculinity, I was waiting until I found the person who would love me and all my quirks forever before sharing myself intimately. It just didn't happen that way. Instead, a mentor at my school exploited my innocence and preyed on a broken young girl who—at some point—lost her way.

The circumstances which moved me from my mom's house to my dad and stepmom's apartment during my senior year left me bitter, angry, and hopeless. My mom had remarried and moved away while I was away at a summer college program at Syracuse University. I was no longer welcome in the home I had grown up in. My life, as I knew it, had ended. I would be living with my dad—whom I had only been visiting on weekends since junior high school.

Having lived away from my father since he and my mother divorced twelve years earlier, I was completely unaccustomed to him and he to me. As we struggled to reconnect with one another, I fell further into feelings of isolation and depression. Sometimes he'd lock me out of the apartment for coming home from school too late. Other times he'd simply come and go without speaking to me at all. When I was there, I spent time in my room, alone. I kept my grades up, but I just wanted to go back home to my mom. We struggled. I was afraid of him. Our disagreements turned into verbal abuse and physical violence.

I began spending hours away from my home trying to escape my life. At 17, I was college bound but still had a certain emptiness since I felt my parents had all but abandoned me.

On Saturdays, I would ride around with my best friend—who was two years younger than me and had no license. I began looking outside of my family for acceptance. That's when I met "him."

He wasn't impressive on the eyes. Yet, he was always nice to me. For a while, he called me his little sister. At the time, I had a crush on his friend—a guy who was five years older than me and had no business talking to me romantically—and he often joked about "hooking us up." I thought he was my friend.

One evening, my dad and I were at odds. He called me a "ho" after seeing a pair of jeans I wore because they were tight and tattered. I usually deflected his comments knowing he didn't mean them. This time, though, his words cut deeply. I was a virgin. For him not to see me for who I was hurt me immensely.

Over time, I had grown to care less and less about myself. My hopes to meet someone who would cherish me for a lifetime had started to fade. Nothing in my life was a fairytale, and I just stopped expecting it to be.

I was a virgin. For him not to see me for who I was hurt me immensely.

I called him on the phone and asked him to pick me up. I wanted to go get ice cream or just watch some TV in a place with peace and quiet.

His words to me were jarring. Solemn. Curt.

"It's one o'clock in the morning. If I come get you, you know what we are going to do, right?"

"Shit." All I could think was "shit." What I said was calm and my version of mature.

"Yeah, that's cool. Please just come get me. I need to get out of here." He knew all about my family life as I had shared my personal issues with him weeks before.

In that moment, I chose between my abusive father and the man who seemed like my friend but I now knew wasn't.

He picked me up in minutes. I was scared. I wanted to tell him that I didn't want to do anything. But, I felt like I had no choice because I had already gotten in the car. He did what he said he would do by coming to rescue me. Now I owed him, I thought.

We got to an apartment building about 10 minutes away. We walked upstairs quietly. He knocked on the door a few times and I surveyed the parking lot. I recognized the man who answered from school events. He recognized me too. He was shirtless and wearing pajama pants. It was like he knew what was happening. He opened the door, walked away, and returned to bed like this was something he had done before. I later found out it was.

I sat on the couch with my abuser. We made small talk. The TV was on and they were selling rotisseries on the late night infomercials. There was no love between us. There was no chemistry. There was nothing. I wanted apple pie and ice cream. But, more than anything, I wanted to go home and see my mom there waiting for me.

He began touching my body and was immediately disappointed that I didn't have a reaction to him. He seemed almost offended. He never kissed me. He told me what to do and I did it. He told me to undress and lie down. We moved to the floor as I kept my eyes locked on the television through the legs of the glass coffee table. I noticed the infomercial had twenty eight minutes left. It had a timer on the screen counting down how long viewers had before the $29.99 installment plan deal would end.

When he was done, I got dressed. The infomercial still had 13 minutes left. He drove me back to my dad's and talked in the car with me for a while before saying goodbye. We talked about sports and college. He said he wanted to take me places. He wanted to book hotel rooms, wine and dine me, and buy me things. It was like he was my friend again.

Having been disappointed by the first man in my life, I wanted to believe him. But I just didn't. I was smart enough to know what he was doing. And I was disappointed in myself for falling for it in the first place. I was overcome with guilt and shame for having been naïve. I had always prided myself on being strong. I just wasn't strong enough this time.

I actually didn't believe the rape really happened until I felt pain and bleeding the next day. When people began chatting about me at school, rumors emerged that he had a previous intimate relationship with another girl. I wasn't a one-time offense for him.

I continued to struggle with depression even after leaving my dad's and becoming homeless. My best friend's mom let me crash on their couch for a while until I convinced my mother that I needed her help. Soon after, she found me a place to stay with her friend until I finished the school year. I stopped talking to my abuser. I knew what happened was wrong but I couldn't find the words to explain why.

What followed was years of me struggling to come to terms with the coercive rape I experienced. I told myself it was my fault for giving him permission to rape me. I blamed myself for not waiting just a few months longer when I met the man who would become my husband.

At almost thirty and a mother of a baby girl, I recognized that I would never be able to teach her to love herself if I didn't find a way to love all of me too. I realized that as a legal adult, he was the abuser. I learned that, at seventeen, I was incapable of consenting. And, I found out that I wasn't alone. Many women experience sexual coercion or unwanted sexual intercourse and are unaware of any crime. It isn't because we want the sexual advances, assault, or abuse. In some cases—like mine—we are too ashamed to call it by its name.

I told myself it was my fault for giving him permission to rape me.

It was after reading Janet Mock's 2011 story that I decided to share my story as well. I wanted to tell young women that it isn't their fault if they have been sexually abused. Acquaintance rape is not rare. My abuser positioned himself in my life as a friend for months before the abuse happened. I was able to break away from the isolating people and structures that helped my abuser target me, but not all sexual abuse victims have that chance. Even worse, many young women are raped by family members, making it even more difficult to expose the crime when it happens.

My story does not blame anyone else besides my abuser for his actions. I see it happen all too often in other stories of sexual assault that non-victims completely miss the point. This propensity toward victim-shaming and parent-blaming just underscores how rape culture in this country functions to protect men who exploit others sexually. Not only is it sickening, it makes young people and women (and men) less likely to report their rape or assault.

I have since mended my relationship with my mother and father. My mom and I are best friends. While my father recently passed on, he and I also reconnected over the years. I wouldn't be the person I am today without both of their contributions to my life.

I didn't know I was raped. Now I do. I am moving forward blamelessly, honestly, and freely because I know truth is what I deserve.

This article originally appeared in the print version of Marie Claire.