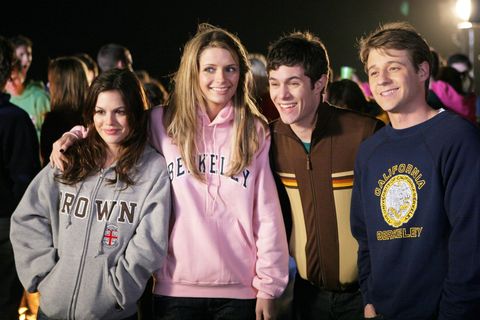 Update, 7/16: The O.C. musical has found its core cast, which is, as you thought it would be, comprised of four youngish actors who aren't Ben McKenzie, Mischa Barton, Rachel Bilson, or Adam Brody because they have to be able to sing for an hour-plus straight.

Nashville's Tilky Jones stars as Ryan, while Molly McCook plays Marissa, and Pretty Little Liars' Brendan Robinson and Greer Grammer appear as Seth and Summer, respectively. Digital Spy reports the one-off performance will incorporate songs from all four seasons, so it's true–you really can have almost everything you've ever wanted.

Original post, 6/28: First Full House, then Clueless, and now The O.C.—our nostalgic hearts are so overwhelmed, we might burst into song.

The Fox drama, which toyed with our emotions and tugged at our heartstrings from 2003 to 2007, is the next on-screen gem to be adapted for the stage, reports Variety. The Orange County story of oh-so-dramatic teens Seth, Summer, Ryan, and Marissa will be turned into a musical in Los Angeles by the same team behind "Cruel Intentions: The Musical."

The show has been greenlit for a one-night-only event on Aug. 30, but if the adaptation finds the same success as the Cruel Intentions musical did, more dates are sure to come (that show now runs every Thursday and Friday night).

So far, only the roles of Luke Ward, Kristen Cohen, and show creator Josh Schwartz have been cast (cue behind-the-scenes drama!), and we can't wait to see who will be filling the musical shoes of the OC's fab four.

Here's to hoping Ben McKenzie, Mischa Barton, Rachel Bilson, and Adam Brody get early tickets and have a front-row reunion lovefest, just like the Cruel gang.

tumblr.com
This content is created and maintained by a third party, and imported onto this page to help users provide their email addresses. You may be able to find more information about this and similar content at piano.io
Advertisement - Continue Reading Below
More From Culture
Is Wellsbury From 'Ginny & Georgia' a Real Place?
People Have a Lot of Feelings About 'I Care a Lot'
Advertisement - Continue Reading Below
The World According to Billie
Will There Be a Season 2 of 'The Queen's Gambit'?
The Sexiest New Movies of the Year
Meet the Cast of 'Ginny and Georgia'
40 Secrets From the 'Bachelor in Paradise' Set
Pre-Order These Highly-Anticipated 2021 Books
The Best Shows to Stream on Every Platform
A Look Back at Princess Anne's Life in Photos