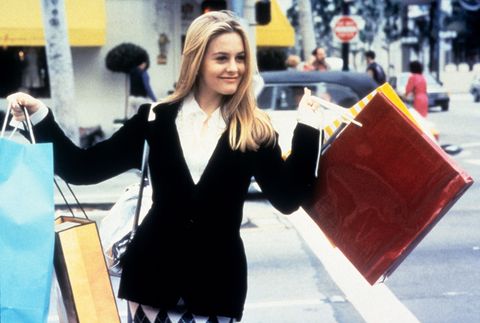 If you can believe it, next month marks the 20th anniversary of Clueless, a work of cinematic genius that encapsulated '90s Valley Girl realness to a tee, teaching us invaluable dating lessons and making us aspire to a Cher Horowitz-worthy computerized closet—we're *still* working on it.

While this multi-decade, momentous occasion makes us feel old, there is a consolation prize. Following in the footsteps of cult classics that have been brought to the Great White Way (ahem, Cruel Intentions), Clueless will become a musical, according to Entertainment Tonight.

While it's not the first time we've been teased with the premise, new details have emerged that pretty much have it set in stone. For one, the film's director Amy Hecklering has revealed that she's written a script and it will be a "jukebox musical," which means there are sure to be a variety of '90s Top 40 hits in the mix. But bummer: we're convinced that "Rollin' with the Homies," is begging for a world-class orchestra and some bombastic Broadway camp.

Further ensuring that the project is on its way to nabbing a Tony? Broadway director Kristin Hanggi (of Rock of Ages glory) and the producers behind Jersey Boys, who are also on board for the re-imagined revival. But before you head to Playbill.com to enter the ticket lottery, hold off, because it's going to be a minute.

Everything is moving slowly, namely because casting will be such an arduous process, says Hecklering. After all, you just don't come across an Alicia Silverstone, Paul Rudd, Brittany Murphy, or Stacey Dash everyday. They have their work cut out for them, that is for certain.

A glimmer of hope? Hecklering has said that Katy Perry is interested in taking on the role of Cher. Chills, you guys, chills.

Lauren Valenti Associate Web Editor I’m the associate web editor at Marie Claire.
This content is created and maintained by a third party, and imported onto this page to help users provide their email addresses. You may be able to find more information about this and similar content at piano.io
Advertisement - Continue Reading Below
More From Culture
Who Is Zach J. on 'The Bachelorette'?
A Classic Horror Bucket List for Scary Movie Buffs
Advertisement - Continue Reading Below
'The Queen's Gambit': All About Those Green Pills
This Is the New 'Bachelorette' Villain
Dale Moss Is a Super Important 'Bachelorette' Star
It's Been a Weird Year for 'The Bachelorette'
50 Sexiest Movies of All Time
'The Queen’s Gambit': The True Story, Explained
Thoughtful Gift Ideas for the Work Wives You Miss
How to Join Marie Claire's Online Book Club