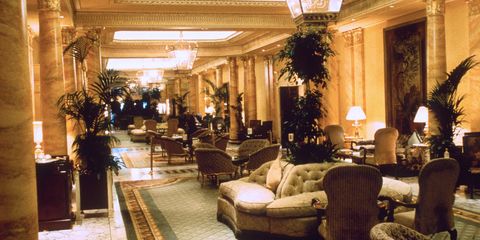 In today's story that will make your brain scream "WTF!" (which, to be fair, is basically every story these days), a couple of Financial Times reporters went undercover at a men's-only charity gala at London's Dorchester Hotel only to discover that guests were groping and harassing the female servers. There were apparently also many lewd "repeated requests to join diners in bedrooms elsewhere in the Dorchester."

The Financial Times reported that the women working the event were given short, tight, black dresses, black high heels, and a black belt resembling a corset. They said men were repeatedly putting their hands up their skirts, and one woman said an attendee exposed his penis to a hostess.

"One woman said an attendee exposed his penis to a hostess."

The outrage prompted the charity, Great Ormond Street Hospital, to return its donations and sever ties with the Presidents Club—the charitable trust that organized the event. And at least one other business that had once sponsored a table at the event, also broke its ties.

"Let's hope every man who attended this event will think twice before accepting another invitation to a 'men only' event with more than 100 female hostesses," parliamentary equalities committee chair Maria Miller tweeted.

The event was hosted by comedian and children's author David Walliams. "Neither the company nor our attendees were aware of the alleged incidents until informed of them by the Financial Times," the company said in a statement. "WPP takes these reports very seriously and, while we will continue to support relevant charities, in light of the allegations we are ending our association with the event." The organizers of the event promised an investigation.

"Such behavior is totally unacceptable," the Presidents Club said in a statement. "The allegations will be investigated fully and promptly and appropriate action taken."

The fury comes at a time of reckoning for many men in positions of power as women speak out about sexual misconduct, sparked in part by the scandal surrounding Hollywood producer Harvey Weinstein. Women rallied all over the world this past weekend to demand equality, marking the anniversary of the inauguration of Donald Trump.

The Presidents Club dinner is an annual event for a group that claims it has raised some 20 million pounds ($28 million) for children's charities over the past 33 years.