It’s 2018, and the last few months have brought a lot of positive change to—or at least awareness of—the pervasiveness of sexual assault and sexual harassment in our culture. We've come a long way. People care. They're listening. They are—often, at least—believing women.

But there's an insidious question that keeps coming up in comment sections and over dinner tables: "Why didn't she just leave?" If a woman is in an uncomfortable sexual situation, shouldn't she—in the age of empowered women—just take charge and walk out?

Usually we’d throw a bunch of stats and figures out, like that studies have found that women can experience temporary paralysis that prevents them from fighting back or screaming during sexual assault, or that 59 percent of sexual violence is committed by an acquaintance, making the situation all the more emotionally and mentally difficult to navigate.

But instead of telling you why women “don’t just leave” during their assaults, harassments, and uncomfortable encounters, we'll let these 14 women speak for themselves.

“Because I was tired of fighting and was in denial of what was actually happening to me. I told myself that if I accepted it, if I went along with it, if I stopped saying ‘no,’ then I wasn’t actually being assaulted. Because you can’t assault someone who isn’t fighting back, right? I made myself believe that in the moment, despite how wrong it was.” —Chloe, 27

“Because sometimes ‘leaving’ doesn't mean you actually get to leave the situation behind, because next time, the person might try to bully you, or slander you, or physically assault you for having said ‘no.’ It starts to feel like punishment when you’re forced to ‘leave’ a situation you had no hand in creating, and my predator wanted me to know that I couldn’t ‘just leave,’ no matter how many times I tried.” —Liz, 28 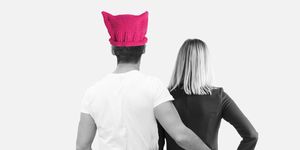 My Feminist Date Tried to Force Himself on Me

“Because he was my friend and we worked together. I thought I could talk it out and get through to him.” —Dana, 32

“Because I had already tried pushing him away. But as women, we’re taught that we shouldn’t be rude, or that we’ll be teased if we flirt and don’t follow through. So even though, internally, I wanted to say no, I felt like I couldn’t.” —Anonymous

“Because I was violated in my own home. People either don't know, don't care, or simply forget that ‘just leaving’ requires power. When you're being sexually assaulted, you don't always have that power because your assailant has, in some way, taken it from you. And one of the many ways that my assailant took away mine was by attacking me in my space, in my own home.” —Joy, 29

“Because I trusted him. Because I was drunk, I was in a space I thought was safe, and I never thought I'd have to.” —Allison, 27

“Because I was in denial of what was actually happening to me.”

“Because I felt like I'd gotten myself into the situation—I'd flirted with him, I'd invited him up. And when he started doing things that made me uncomfortable—things I never would have consented to outright, but because we were already in a situation, I thought I had to—it seemed like they were just a continuation of the spectrum we'd both already started. What I know now is that just because I was a consenting adult in the room doesn't mean I had issued blanket consent to everything he decided to do once he entered that room.” —Anonymous

“Because it's not that I didn't know how to say ‘no,’ it’s that I didn't logically understand why I was saying ‘no’ in the moment, other than the fact that I was upset and uncomfortable and shocked. I ended up giving in and just feeling horrible afterwards.” —Elizabeth, 28

“Because I was unconscious. In one way, it makes it easier for me to get over the trauma, but in other ways, it’s more disturbing, because I’ll never totally know what truly happened that night.” —Anonymous

“Because when you're a woman, you've been trained that rejection often invites retaliation, so you give the benefit of the doubt longer than you should. You’re raised to value being liked over being respected.” —Angelica, 29

“Because I thought he would listen; I thought he had listened to me tell him I didn’t want to have sex if he didn’t have a condom. I felt sick. I spent the night on the couch by myself, because I had a couple of drinks earlier and couldn’t drive home. I stayed on the couch instead of leaving because I was young and had never called myself a taxi before and car-sharing wasn’t a thing yet. It’s not always easy to ‘just leave.’” —Anonymous

“I let the assault stay quiet so I wouldn’t make a scene.”

“Because it felt safer. Yes, it can feel safer for women to just go with the situation than to pull away and say, ‘let's take this slow’ or ‘no’ or ‘I have to leave.’ The thought of ‘what might happen if I stop?’ can be scarier than just continuing and doing what he wants.” —Melanie, 26

“Because I was caught between this feeling of ‘Well, he was nice to me, so maybe I should just let this happen,’ and ‘Well, I don’t want to have sex with him, but I guess I’ll make out,” and then ‘Well, at least he isn’t raping me.’ I kept saying no, but I also kept telling myself that he might still respect my boundaries.” —Allison, 27

“Because he basically pinned me down on his bed. We were friends, and were hanging at his apartment, and the whole thing seemed like a big, flirtatious game to him that I didn’t know how to play, despite saying ‘no’ many times. I felt like I had to keep the whole thing light and jokey so he wouldn’t turn violent, which made the situation even worse to stomach.” —Anonymous

.
This content is created and maintained by a third party, and imported onto this page to help users provide their email addresses. You may be able to find more information about this and similar content at piano.io
Advertisement - Continue Reading Below
More From Love & Sex
‘Til COVID Do Us Part: Divorce in the Age of Zoom