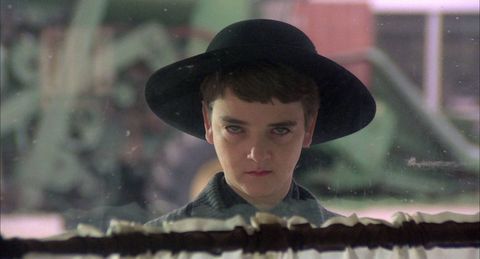 Such a classic—there's nothing more frightening than knowing you might be pregnant with the spawn of Satan. (Oops.)

A scary movie based on true events = the ultimate creepfest, and that's exactly what you get with The Amityville Horror. (Well, maybe.) In 1975, the Lutz family bought a house and then, you guessed it, crazy things started happening. Jay Anson wrote a book detailing the events, and though some say they're exaggerated/not true, that doesn't stop this from being a must-watch movie.

Stephen King's classic centers around demonic children in a farm town and has spawned many a sequel—but none as good as the original. Watch. Obsess. Repeat.

Wes Craven (RIP) might have been known for his bigger films like Scream and A Nightmare on Elm Street, but People Under the Stairs is a weird, weird trip that many would agree is his strangest (and possibly most brilliant?) movie. Give it a watch.

The long-awaited sequel to Silence of the Lambs does not disappoint. (Hellloooo, Clarice.)

In this Swedish film, a 12-year-old bullied boy finds friendship with a vampire girl—but things get complicated. (P.S. They did a 2010 English version—it's not as good so stick with the original.)

A mom is tired of her son's incessant worrying that there's a monster in their home. Except he might be right? This film opened to rave reviews, and was the third most-praised movie of the year on Rotten Tomatoes. In other words: Watch.