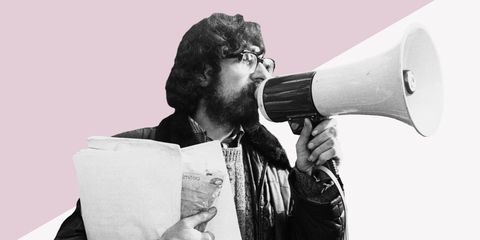 There are feminists, and then there's me. I was raised by a single mom, I earn a living writing about women's issues, and then I donate some of those earnings to Planned Parenthood every month. I attended a women's college where each spring we would join hands on the green and sing, "Hey, hey! Ho ho! The patriarchy has got to go!"

So I thought it would humorous to interview a men's rights activist (sometimes called an MRA or a "meninist") to get inside their confounding psychology. Humorous like when you turn the Republican debates into a drinking game—you're being ironic about something that actually sends you into a blind rage.

I reached out to Paul Elam, the CEO of the organization A Voice for Men and one of the most notorious leaders of the men's rights movement, and we set up a chat. The first time we spoke, I was so surprised by his well-argued points about the very real issues affecting men and boys that I had an honest-to-god panic attack. The experience was akin to the long, slow realization that maybe Santa Claus isn't real. I felt shaken to my core.

But there's no denying Elam's more flagrantly offensive moments—his creation of "Bash a Violent Bitch Month" and his fights against the White Ribbon domestic-violence program for its unfair focus on men as the perpetuators of violence. This is the kind of "activism" that would chill anyone to the bone.

So, post-panic attack, I called him back to talk about these provocations—needless to say, things got a bit more heated. Read on for parts one and two of our conversation, and if you need a breather...well, I get it.

Marie Claire: What's your definition of a men's rights group?

Paul Elam: We're an egalitarian, equity-oriented organization that believes fully in equal treatment under the law, equal opportunity for all. Not necessarily guaranteed equal outcome, but everybody should get a shot. We are big supporters of ERA [the Equal Rights Amendment]. We'd like to see it come back and be ratified and become the law of this land. And we don't think anybody who actually thinks critically about these things could imagine that feminism is a way to get to that state.

"We're an egalitarian, equity-oriented organization that believes fully in equal treatment under the law, equal opportunity for all."

MC: I want to come back to that point, but how did you first become interested in men's rights activism?

PE: I was working in the mental-health field. I'm Houston-based, and I was an addictions counselor from the early '80s to about 2000. And I noticed during that period of time a big change. It came with what I call the "feminization." When I say feminization, I'm not talking about making female, but falling under the sway of feminist ideology. The field of psychology became feminized. I began to see a lot of anti-male sentiment enter the treatment field. Identifying masculinity as a pathology versus the pathology that the individual already has, that were clinically diagnosed. It had the tendency to enable women, and undermine their treatment for alcoholism and drug abuse, with the strong messaging that alcohol and drugs weren't their problem—it was actually men. And I saw a lot of damage done by that.

MC: What are some examples that you see of men's rights being threatened? Or problematic treatment of men in the culture?

PE: Okay, how much time you got? [laughs] Family courts, obviously—there is a big bias against men in family courts when it comes to custody arrangements. There is the horrific situation of ex parte restraining orders where men are removed from their homes routinely during a high-conflict divorce based on accusation alone. They're robbed of their income, robbed of their property, they often lose everything in that process and there's no redress for them.

Then we have Dear Colleague letters, a huge problem for universities that receive state funding, that they are going to reduce their standards of evidence in sexual-assault allegations, and to basically take control of the criminal-justice system. There are between 300 and 400 suits right now from men back at universities who allege that they have been falsely accused. [Editor's note: We were able to find four such lawsuits.] I feel bad for schools that are trapped in this stuff.

So those are two problems. Another problem begins with men's genital mutilation at birth. How can we talk about issues that affect men if we can't assume their genital integrity at birth? That's a glaring issue. A couple is more likely to lose their male child to circumcision complications than they are to SIDS [Sudden Infant Death Syndrome]. [Editor href='http://www.researchgate.net/publication/240804903_Lost_Boys_An_Estimate_of_U.S._Circumcision-Related_Infant_Deaths' target='_blank">has been debunked by mainstream academia.'] And yet we still continue this practice when we wouldn't dream of doing so against women.

That's a small sample. There are lots and lots of examples in the world. Men are falling out of education. The rate of men in college has dropped down to 40% now, and it's continuing to fall. The outlook is bleak for their future.

Men are disproportionately affected by suicide. I would assume that if three out of four suicides were female, this would be a national crisis. [Editor href='https://www.afsp.org/understanding-suicide/facts-and-figures' target='_blank">four out of five suicides in the U.S.']

MC: What are some misconceptions about the men's rights movement?

PE: On the extreme end, that we inspire people like Elliot Rodger to commit a mass shooting, which is absolute insanity. He was not a men's rights activist. The men's movement was not included in his lengthy manifesto. He did not visit men's rights activism websites. He was a young, very sick sociopath. [Editor href='https://www.reddit.com/r/puahate' target='_blank">this subreddit, which also aims to discuss MRA issues.']

MC: At the start of our conversation, you defined your organization as being egalitarian, and said men's right activists are interested  in equality. That's the same as being a feminist. So how are they different?

PE: It goes into interpreting actions, and platforms, causes, agendas. You can look at what men's rights activists are fighting for—like fair treatment in family courts. And you still see the National Organization for Women hanging onto defending preferential treatment of mothers, because that's what their constituency wants. They are both defined was wanting equality, but what you're saying  and what you're doing is sometimes not the same thing.

I look at feminism, and what feminism is doing in the UN with He for She. That's another example of, if you will, the patriarchal mindset of "men need to take care of women," instead of empowering women to take care of themselves. There's all this language around equality that doesn't help equality. Feminism is currently, in its own way, saturated with these hypocrisies.

MC:  You said that a lot of the coverage of your more extreme sorts of projects has been misconstrued. So what are we misunderstanding about things like "Bash a Violent Bitch Month"?

PE: I wrote that after reading a column on Jezebel.com in which the writers, editors and readers were celebrating the physical abuse of their male partners. The conclusion the Jezebel editors drew from all that was, "We asked our readers if they've ever hit their boyfriend and all we can say is, maybe you better not f-ck with us."

The article offended and me and I thought, "Let's write one from the other side. Let's write a piece of satire." The reason that you're calling me back now with these concerns isn't about the fact that Jezebel.com still to this day has an article up glorifying physically beating and humiliating women's partners as long as they're male. Your concern is that I wrote an obvious piece of satire in response to that. Your talking to me is proof that it needed to be written.

MC: But don't you feel like the tactics you're using are undermining your purpose? They make you seem just as vile as what you're fighting against.

PE: Not at all. The fact of the matter is, we're still talking about people dying, about people being falsely imprisoned, about men being ripped away from their children and their homes taken from them, about them killing themselves at four times the rate of children, and the best we're get back from a very screwed-up feminist establishment is, "Gee, couldn't you talk about it a little nicer?" I have no apologies for that.

"I'm sorry, I don't know where you pulled that statistic out of, but it wasn't a very illuminating place, I'm afraid."

MC: I'm not saying that you have to be precious about these issues, but by exaggerating them, how are you any different from the ideologues you rail against?

PE: The difference between what I do and what feminists do is, the harsh facts that I lay out, they're facts. What the feminists have are lies. They're outright lies.

PE: I'm sorry, I don't know where you pulled that statistic out of, but it wasn't a very illuminating place, I'm afraid. Men are sexually attacked, sexually abused, at rates far higher than what happens to girls at the hands of adults. [Editor's note: As you'll see below, that's simply not true.] If you want to turn it into a number game, let's say that 10,000 men are raped and 10,200 women are raped. That's the rationale that people want to carry for dismissing an entire class of people.

MC: That's not a real number. Here's the real number: One in 33 men are raped, one in six women are.

PE: Where did you get that?

PE: RAINN got some of their research from Mary Koss. And we can get into an hours-long discussion on the validity and the political agenda behind that —by the way, when Koss originally first came out, it was one in five, and then the narrative jumped to one in four. [Editor href='http://www.cdc.gov/ViolencePrevention/pdf/SV-DataSheet-a.pdf' target='_blank">reported in 2012 that the rates are one in five women, and one in 71 men.']

If there's going to be some Marie Claire readers out there offended by the fact that this guy got angry over an injustice, all I can say is, that's part of why there's a movement. We have been told as men for years now to express our feelings. And then the moment we express them, somebody says "shut up." And I'm not shutting up anymore, for anyone.

This content is created and maintained by a third party, and imported onto this page to help users provide their email addresses. You may be able to find more information about this and similar content at piano.io
Advertisement - Continue Reading Below
More From Culture
This Summer, Let's Escape
The Beachiest Beach Reads of All Time
Advertisement - Continue Reading Below
Everybody Loves Annie
Films That Pull Back the Curtain on Royal Life
'Succession' Season 3: Everything We Know So Far
A Father’s Day Gift Guide for Procrastinators
We Finally Know Who's Hosting 'BiP'
Won't Call the Midwife
What Betty Broderick's Kids Think About Her
Why Did the 'Dawson's Creek' Theme Song Change?