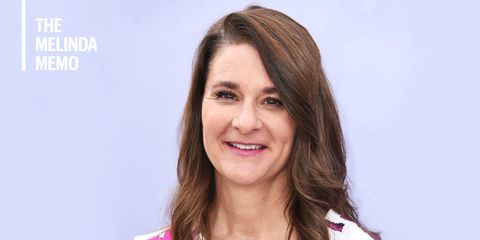 For the first five decades of my life, I was, at various points, a computer science nerd, a Microsoft executive, a full-time mom, and a co-chair of the foundation Bill and I started together. But on my 50th birthday, I made a promise to myself that the rest of my life would have one central focus: improving the lives of women and girls around the world.

That's why I'm joining up with MarieClaire.com as a contributing editor: I'll report from the front lines about how the world is changing for women—and how it should change more. I want to spark smart conversations with you about what it means to be a woman today (and tomorrow), whether here in the U.S. or in rural villages in some of the world's poorest places.

These conversations are more important than ever because people are finally listening. We're in the midst of an international movement for gender equality unlike anything the world has ever seen.

It used to be that if the United Nations convened a panel on an issue affecting women and girls, you knew there were going to be a lot of empty seats. If you tried to talk to a finance minister about investing in women and girls, you often got shrugged off or tuned out.

Today, the opposite is true. The African Union declared last year the "Year of Women's Empowerment and Development." At the last G7 Summit, Chancellor Angela Merkel insisted that the rights and progress of women and girls warranted a central place in the conversation among world leaders. And when a reporter asked the new Canadian Prime Minister Justin Trudeau why his cabinet is half women, he responded simply, "Because it's 2015."

I've always believed that "women's issues" are essentially human rights issues: education, autonomy, accessible healthcare. So as important as it is to have women at the center of these conversations, we need these conversations to translate into action.

When I visit communities around the world, I meet women who can't afford to feed their children that they already have, but keep getting pregnant because they have no access to contraception. I meet women who have so many ideas for lifting up themselves and their families, but can't access any funds to act on them. I meet girls who are falling behind their brothers in school because they're the ones expected to do chores around the house, leaving them less time to study.

But progress is happening: For the first time ever, nearly as many girls as boys are going to primary school. More women are participating in the global workforce, making their voices heard in more industries every day. Almost everywhere on the planet, women are living longer, healthier, fuller lives than ever before.

Stay tuned for regular contributions from Melinda–and tell us in the comments and on Twitter what issues and topics you'd like her to weigh in on.

Melinda Gates As co-chair of the foundation, Melinda Gates shapes and approves strategies, reviews results, and sets the overall direction of the organization.
This content is created and maintained by a third party, and imported onto this page to help users provide their email addresses. You may be able to find more information about this and similar content at piano.io
Advertisement - Continue Reading Below
More From Culture
53 Wild and Completely Iconic Vintage Porn Films
Dale Moss Is a Super Important 'Bachelorette' Star
Advertisement - Continue Reading Below
It's Been a Weird Year for 'The Bachelorette'
Political Books to Read Ahead of Election Day
The Sexiest Movies on Amazon Prime
HBO Is Giving Fans 2 Special 'Euphoria' Episodes
What to Know About Tayshia's 'Bachelorette' Cast
Clare Crawley's 'Bachelorette' Cast Is Out
Lessons From Frida Kahlo in Embracing My Culture
19 Documentaries on Netflix to Watch Right Now