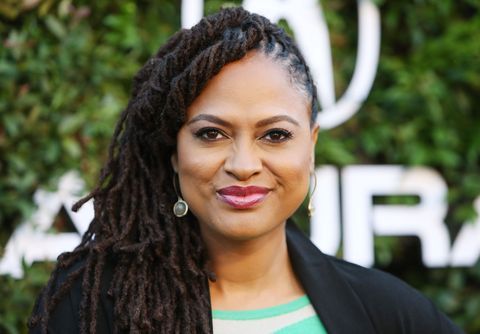 With hot topics like diversity and gender making headlines in Hollywood every other day, you would think more people would be doing *something* to enact change. But, unfortunately, a lot of times it's just words.

That's why we need to focus more attention—and applause—on the people fighting for good. Like these seven industry powerhouses using their platforms to change the tide.

Ava DuVernay is one of the prominent voices in asking for diversity in Hollywood. As the director of Selma, she became the first female black director to be nominated for a Golden Globe, and she was also the first black female director to have her film nominated for an Oscar. In 2010 she founded AFFRM (the African-American Film Festival Releasing Movement) to distribute films made by or focusing on black people. In 2015, the company was renamed ARRAY to focus on women filmmakers as well. DuVernay often brings up topics of inclusion in her tweets and speeches, and journalist Manohla Dargis suggested in 2016 "what might be called the DuVernay test, in which [movies pass when] African-Americans and other minorities have fully realized lives [in movies] rather than serve as scenery in white stories."

Glen Mazarra is committed to making sure he's making room for diversity and women in his writers' rooms. "What surprised me was that when I reached out to agencies people thought I was just covering myself, that I wasn't sincere," Mazzara told Fortune. "And I really started to see as an employer that the system is rigged to accept white males, to train them and keep them in the pipeline. It's very difficult to get other people into the pipeline and then to give them the tools to succeed. There's resistance not just on a systemic level but in the writers' room."

"Sometimes in Hollywood, showrunners will say, 'I don't want to hire a black writer—I had one and it didn't work out,'" says Mazzara. "We will hire a woman to represent the strong female perspective. Why can't she represent everyone's perspective? This needs to be corrected, this needs to be changed. It's better business to have more people telling their stories. The material is better. And it's not right to be dealing from a stacked deck."

Freida Pinto knows that Hollywood hasn't always been accepting of different cultures and stories. So she started her own production company and has joined forces with Queen Latifah, Jessica Chastain, Juliette Binoche, and more for the We Do It Together organization, which focuses on making movies by and about women. "Three years ago, when I started up my production company, one of the things I wanted to do was be able to make at least my first three films from India. I felt that there was a lack of representation," she told Elle. "It's all good for me to go out there and play a character named Caroline in Planet of the Apes, but at the same time, I want to be able to put stories of my community out there. Similar to what Oprah is doing: She's telling stories of strong, powerful women from her community. And the more stories like that you put out there, the more you break down the stereotypes and barriers. The first three stories I produce will be from my country, and I have two right now. I don't want to discuss it right away, but they're very inspirational stories."

Following the #OscarsSoWhite controversy, J.J. Abrams took a look at his production company Bad Robot and decided to make some changes. Already working to improve diversity in front of the camera (see: the diverse cast for Star Wars: The Force Awakens), he has partnered with the agency CAA and his studio partners, Warner Bros. and Paramount, to require that women and minorities are considered for writing, directing, and acting jobs at Bad Robot in a way that's proportional to their representation in the U.S. population.

"We're working to find a rich pool of representative, kick-ass talent and give them the opportunity they deserve and we can all benefit from," Abrams told the Hollywood Reporter. "It's good for audiences and it's good for the bottom line."

You can't talk about people changing Hollywood and *not* talk about Shonda Rhimes. The showrunner has made it a mission to educate the industry and audiences at large about the struggles women and non-white males face on- and off-screen. "I really hate the word 'diversity,'" she said. "It is just something other. Something special, like it's rare. 'It's diversity!' As if there is something unusual about telling stories about women or people of color or LGBT characters on TV. I have a different word. I call it 'normalizing.' I make TV like the world looks."

Saldana launched Cinestar Productions with her two sisters (in conjunction with Lionsgate) in 2014 to help movies reach Latino audiences (and, obviously, create projects that resonate with that audience). As an actress, Saldana has often spoken about her need to represent her heritage in an authentic way, and pave the way for all women. "It gets pretty boring when all you are is the support system for a male character."

Paul Feig has a history of making movies with empowered (and hilarious) women at the forefront—AKA The Heat, Bridesmaids, Spy, etc.—but in revamping Ghostbusters with an all-female cast, he encountered more sexism than he ever thought possible. And that's only made him want to do more to make sure women are given the opportunities as a whole in the industry. "The first wave when you make an announcement like that is overwhelmingly positive. Everyone's so happy and you're like, 'This is great.' Then comes the second wave, and you're like, 'Oh my God. Some of the most vile, misogynistic shit I've ever seen in my life,'" he told Variety.

For now, Feig is focusing on continuing to highlight women in real ways and make scripts that have more women—in essence, being an advocate. "I don't think [the situation in Hollywood] is getting better," he told the Huffington Post. "It's not as terrible as it was, but look at the number of lady directors. I have guilt that I'm a man doing these movies. Women should be doing them, too! The studios aren't giving them the opportunity for whatever reason, and the roles still aren't there for women like they should be."

Samantha Leal Senior Web Editor I'm Sam, the senior editor at MarieClaire.com.
This content is created and maintained by a third party, and imported onto this page to help users provide their email addresses. You may be able to find more information about this and similar content at piano.io
Advertisement - Continue Reading Below
More From Culture
Who's Who in Netflix's 'Emily in Paris'
The Privacy Whisperers
Advertisement - Continue Reading Below
Take Our Quiz to Find Out How Safe Your Info Is
The Best Serial Killer Movies Ever Made
What to Know About Tayshia's 'Bachelorette' Cast
Tara Palmeri on Hosting a Podcast for Survivors
It's Been a Weird Year for 'The Bachelorette'
Clare Crawley's 'Bachelorette' Cast Is Out
Honor RBG With These Books & Movies
Sad Movies for When You Need a Good Cry