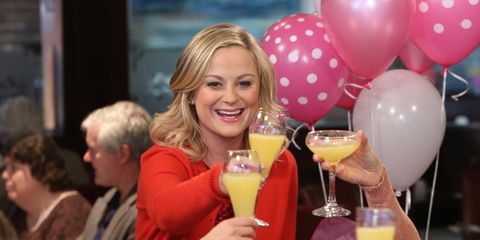 Amazing news for Amy Poehler fans—The Hollywood Reporter has confirmed that the Parks and Recreation actress will be making her directorial debut for Netflix. And as if this news couldn't get any more brilliant, Poehler will also produce and star in her new movie, which just so happens to be called Wine Country.

That's right, Poehler is making a movie about drinking wine, and life can literally get no better than this. Pick up that bottle and fill your glass immediately.

As for the premise, Wine Country tells the story of a weekend getaway to Napa, as a group of friends celebrate a 50th birthday. Yes, please, and thank you. This is my new favorite movie. 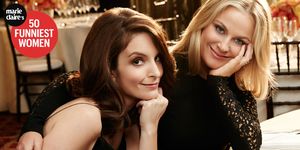 According to the report, Poehler will enlist several of her awesome comedy friends to be in the film, including Rachel Dratch, Ana Gasteyer, Paula Pell, Maya Rudolph, Emily Spivey, and Tina Fey. And because women are just really fucking great, the script is being written by Liz Cackowski and Spivey, who both previously wrote for Saturday Night Live. I think we can all agree that Wine Country needs to be watched immediately by just about everybody.

In a hilarious video posted on Twitter announcing the news, Poehler, Fey, and other members of the cast can be seen singing "Whenever I Call You 'Friend'" by Kenny Loggins, while maybe, possibly, under the intoxication of a little alcohol. The caption tells us all to "Get excited. Get real excited."

Related Story
Amy Poehler Slams the NRA's Leslie Knope Tweet
This content is created and maintained by a third party, and imported onto this page to help users provide their email addresses. You may be able to find more information about this and similar content at piano.io
Advertisement - Continue Reading Below
More From Culture
Thrilling New True Crime Documentaries
What Is Stephanie Land Doing Now?
Advertisement - Continue Reading Below
'Succession' Is Ready to Go 'Full F*cking Beast'
The 2021 Book Releases You Don't Want to Miss
'Squid Game' Season 2: Everything We Know
Breaking Down the Ending of 'Maid'
The Best Dating Sites, Once and For All
How to Make a 'Squid Game' Halloween Costume
All the Deets on Michelle's 'Bachelorette' Season
'Bridgerton' Season 2: Everything We Know