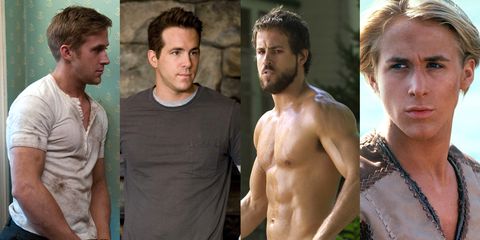 The world has been blessed with not one, but TWO Ryans (Gosling and Reynolds, to be specific—all other Ryans can step to the left) and the time has come to rank their films on a scale of hotness. Please be advised that what you're about to witness may cause profuse sweating (in a sexy way!), a general feeling of nausea (also in a sexy way!), and the impulse to break up with whoever you're dating due to the fact that they are neither of these men.

I am of the opinion that there is almost nothing sexy about Green Lantern, and am only begrudgingly including it on this list out of a sense of obligation. First of all, Green Lantern is literally named after an old-fashioned lighting device commonly found on the prairie. It's like naming a superhero Green Butterchurner.

Second of all, this is possibly the least arousing outfit change I've ever seen:

Wow, how insulting to La La Land right? WRONG. There is nothing sexy about Ryan Gosling in this movie, as he essentially plays a stubborn sulky white dude who thinks he's the only person on earth who truly understands jazz and spends much of the movie mansplaining it to Emma Stone. Next! Bye!

^ Wow, cool, you can play the piano, Ryan. Revolutionary. No man has ever played the piano before. Only you!

I don't want to alarm anyone, but Ryan Reynolds played Melissa Joan Hart's love interest in Sabrina the Teenage Witch (the T.V. movie version), and they almost dated in real life. I mean, understandable—how could anyone see a hair flop this profound and not immediately fall in love with its middle-parted undulating waves?

Also, on a scale of 1-10, how aroused are you by this still of Ryan Reynolds putting a party hat on this girl from behind?

The correct answer is 10, but here's a poll just in case you're confused:

Speaking of middle parts, one time Ryan Gosling was in a TV series called Young Hercules and he looked like this:

And yes, I know this is a list of movies, but it seemed journalistically irresponsible to not include Young Hercules when Ryan spent his time looking like this:

Don't even try to deny that these photos are, on some admittedly disturbing level, very hot.

Hello, once upon a time Ryan Reynolds was in a movie iconically titled Buying the Cow, which, if you read the plot on Wikipedia (that is as much effort as I'm willing to make when it comes to this movie), sounds pretty problematic. That said, this happened, and we shall present it without comment:

Honestly, find me any other human who can make the sentence "I drive" sexy. I'll wait:

This one is complicated because on the one hand Ryan Reynolds spends the movie wandering around with a very ill-advised goatee:

On the other hand, he spends the movie wandering around with a very well-advised six pack:

No words, only Gif:

(And, yes, I know what you're thinking: How are there six Ryan movies with more hotness than that?! How?! These men are just. that. hot. Keep scrolling.)

Ryan Reynolds spends the entirety of Deadpool being the physical embodiment of a literal SNACK, and does it while wearing a mask—proving that Ryan-related hotness comes from the inside just as much as the outside. Also, here's another Gif for you to enjoy, no need to thank me!

Even hotter than Ryan Reynolds in Deadpool is Ryan Reynolds as Wade Wilson (a.k.a. Deadpool pre-transformation) in X-Men Origins. LOOK. AT. HIS. CURLY. HAIR. AND. TANK. TOP. Look with your eyes!

Now your eyes are burning! Go wash them out!

If you prefer your Ryans more emo, welcome to Ryan Gosling in Stay. His hair tells you everything you need to know.

^ "Hi, I'm Ryan Gosling and my interests include Bright Eyes, Converse, and being extremely self-righteously straight-edge. Also, it's 2003!"

Why, you ask? Because this, I answer:

2. Ryan Gosling: The Place Beyond the Pines

The tank top, the blonde hair, the tattoos. These are all merely good. What's GREAT is this scene of Ryan dancing with a puppy:

As expected, The Notebook is coming in at number one for extremely obvious reasons related to Ryan Gosling's sheer perfection as Noah, and the fact that he single-handedly won a wet t-shirt competition that only he was participating in.

Related Story
Best Chris Movies Ranked by Overwhelming Hotness
This content is created and maintained by a third party, and imported onto this page to help users provide their email addresses. You may be able to find more information about this and similar content at piano.io
Advertisement - Continue Reading Below
More From Culture
Simone Biles Quotes to Live By
Could 'Manifest' Come Back for a Fourth Season?
Advertisement - Continue Reading Below
'Bachelor In Paradise' 2021: Everything We Know
Read an Excerpt From 'We Were Never Here'
How to Join Marie Claire's Virtual Book Club
See Inside Julianna Margulies's Personal Library
The Most Unmissable Movies of 2021 (So Far)
The Eternal Sunshine of Juno Temple
Let's Talk About That 'Virgin River' Cliffhanger
Zendaya Shared a Teaser of 'Euphoria' Season 2