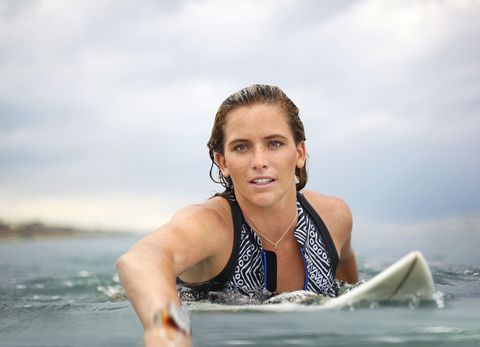 Courtney Conlogue waited for the waves to roll in. The 23-year-old pro surfer was thisclose to clinching the World Surf League championship title at the Maui Pro, the final event of the season, and all she needed was one last big wave. So she waited. As the water calmed and the sea glassed over, it became obvious that this just wasn't her moment. She'd have to settle for second place.

But that was last year. "I've been born and raised to fight and never give up," Conlogue explains, her voice a mix of no-nonsense professional and cool-California-girl chill. "It's just what I do." What she does is ride waves in some of the world's most high-profile locations—like Australia's Gold Coast; Rio de Janeiro; and Cascais, Portugal—better than nearly every other woman on the planet.

Courtney Conlogue is currently at the top of the 2016 World Surf League rankings.
Billabong/Will Adler

This month, the Santa Ana, California, native is hitting the break at the Fiji Women's Pro, the halfway point on the league's Samsung Galaxy Championship Tour. Along the way, Conlogue has been battling not only the elements, but also 17 of the world's top female surfers for the World Surf League title.

Here's the thing about surfing: It's more mind, less matter. And Conlogue has worked on her mental game for over a decade (she's been competing at the national level since she was 11 years old), refining her emotions in the water. "When you execute certain things," she says, "you need to be, not numb, but calm and in control. Surfing is expressive. You're performing in front of judges and an audience. It's a dance on water."

"Surfing is expressive. You're performing in front of judges and an audience. It's a dance on water."

Conlogue learned that taking it easy might not be such a bad idea two years ago when she suffered an acute high ankle sprain that derailed her for five months. "I'm someone who goes zoom-zoom," she says. "But slowing down is actually important for me. It's something that, with my injury, I had to learn in order to let my body recover." Slow or not, when she came back in 2015, she came back hard, paddling within inches of the overall title, won by Carissa Moore.

It's all given Conlogue some perspective on what she wants and how she's going to get it. "I can't control my competitors, or the ocean," she says, "so how am I going to be the best athlete?" She's confident she'll find the answer: "I believe this could definitely be the year."