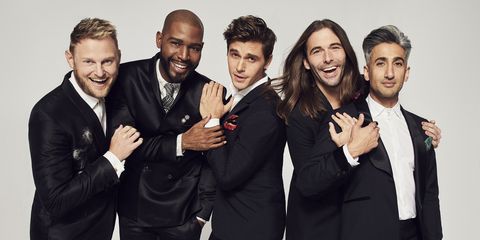 It's been a full year since the Fab Five—Karamo Brown (the culture expert), Antoni Porowski (the food and wine expert), Tan France (the fashion expert), Bobby Berk (the design expert), and Jonathan Van Ness (the grooming expert)—officially met on the set of Netflix's Queer Eye. The first season of the Queer Eye for the Straight Guy reboot was full of both laughter and tears as the group helped eight different "heroes" become the best versions of themselves. Now, season two gives us a closer look at the personal lives of the Fab Five, too.

"The editors were very clear in making sure they added a lot more about each of our journeys and personal lives—you get to see more of our quirks as a group that I don’t think you got to see in the first season," says Brown, whose role is to help participants through the emotional part of their evolution.

Here, Brown talks with MarieClaire.com about how the show is spurring a cultural conversation, what life has been like since season one premiered, and what fans can expect this second time around. (Hint: You're still going to cry.) Warning: spoilers ahead.

Karamo Brown: We filmed the two seasons back-to-back, so we're still in the same location. We shot 16 all together, but we didn’t know which eight would come out first or if we would even see the second eight. It all depended on if people liked the first season. This time, instead of exclusively male participants, we're including our first woman and our first transgender person. It's definitely very emotional.

Marie Claire: Do you have any favorite moments from this season?

KB: There are a lot of special moments across the board. There’s an episode where this amazing father is having a lot of guilt about not being able to support his kids the way he wants to—that’s something we don’t normally see. We only hear about mothers’ guilt and we never really experience what fathers go through. To be able to support him through that was pretty amazing. It was a special moment.

The episode with the trans hero was also epic. Usually when we see the trans community on television we witness trans women, but we never really see through the lens of a trans man. The way we go about it isn't as if we are the ones who are most knowledgeable. It's like, Start us from your journey and tell us what you want us to know. I think it’s really going to shift the cultural conversation.

There’s also a moment where I help someone ask the love of their life to marry them, which is one of those happy, joyful cries.

Marie Claire: How does season two compare to season one?

KB: The first time around I felt like it really showed our group dynamic, but now it’s like, Oh, this is how they really are together. It’s Instagram in real life, except we’re not trolling Antoni. If we get a season three, I’ll make sure we troll Antoni at some point. (I’m joking, obviously...)

Marie Claire: Do you face any challenges that you didn’t experience last season?

KB: For me, I don’t think so. In so many episodes of season one people would be like Oh, I’m not sure what he does, but I think it’s a lot clearer now. I’m supporting the participants and fixing them on the inside.

In the episode with the first female, she’s trying to get her son to go back into the church, and that wasn't an issue for me because I have a pretty strong relationship with God, whereas some of the other guys may have had issues because they don't have the same relationship. I understand both perspectives and I can guide people into understanding what the other is feeling after they’ve had that hard conversation with themselves.

Marie Claire: How has your life changed since Queer Eye debuted in February?

KB: I can be walking down the street and someone will stop me and ask me for one of my hugs. They feel like I’m their friend, which I love. Though sometimes my kids get a little weirded out by it. We’re in the grocery store and someone is crying on my shoulder and they're like "What’s going on?" I’m like, "It’s okay kids, it’s alright." For me, it’s an honor because a lot of the time people don’t feel like they have someone in their lives that they can be vulnerable with.

One time someone sat down next to me at a restaurant and they were like, "So I want to let you know I just got fired from my job and it’s been really hard for me and I can really use your advice." Then they start telling me about their experience. I’ll help them, they’ll start crying, and we’ll just be having this moment in the middle of a restaurant. I’m supporting them in a way that they can support themselves—that’s key, and it's beautiful.