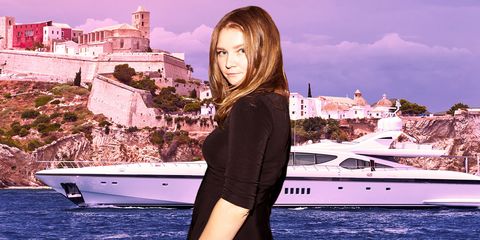 You may have noticed a recent uptick in references to con artists, scammers, and swindlers in the media. Perhaps you read some of the big stories about mega-grifters that have been published recently, like Jessica Pressler’s piece in New York Magazine about social striver Anna Delvey, or the Rolling Stone story about a precocious teen who posed as a wealthy heir and explorer. There certainly seems to be more scamming going on than usual, but we're also paying closer attention to it. That's why this season has been dubbed the Summer of Scam, or Grifter Season.

So how should you feel about scammers? Why is this happening now? And have we, as a society, decided that scams are actually good? Let's unpack this.

What is the Summer of Scam?

Think of it as a collective cultural rally around a really specific type of criminal. Anna Delvey, who now resides on Rikers Island, sort of jumpstarted the whole thing when that aforementioned New York story came out. She spent years posing as a rich, well-connected society girl who attended the best parties and lived out of luxury hotels, all while not actually having any money. While she ended up getting caught, but it took a surprisingly long time. (You should definitely read the story if you haven't yet.) Delvey is weirdly easy to root for—she recognized how vulnerable the rich were to being razzle-dazzled and exploited that weakness. And even though what she did was super illegal and extremely ill-advised, it was compelling stuff: Shonda Rhimes is even making a show about it.

And so began the Summer of Scam, a season-long celebration of liars and cheats who went big and got caught.

Kind of. The Summer of Scam is like other recent, internet-borne cultural movements in that it's tinged with irony and anarchy. Rooting for a crook whose crimes include scamming the rich can be seen as a winking protest of the status quo; a way for Americans to nod at glaring societal unfairness in a way that's a little more nuanced than just "eat the rich." Also, scammers got their designation because, somewhere along the line, they got busted, which makes cheering them on a little less guilt-inducing.

Why is this happening right now?

Over at the New Yorker, Jia Tolentino posits that we’re at a ripe political time for scammers, and points to Maria Konnikova’s 2016 book, The Confidence Game:

Scammers love nothing better, Konnikova notes, than “exploiting the sense of unease we feel when it appears that the world as we know it is about to change.” One gets the sense, these days, that such unease may become constant: the entire globe is getting hotter, market pressures are accelerating, technology is advancing at a dizzying rate. At some point between the Great Recession, which began in 2008, and the terrible election of 2016, scamming seems to have become the dominant logic of American life. The things that people have historically used to build non-scammy lives in this country—housing, say, and higher education—have deteriorated to the point where they are likely to punish you if you are not already wealthy.

Not only that, but the despair and disillusionment many of us have felt since the election can, in certain cases, calcify into a sort of gallows humor. There's something kind of funny and satisfying about idolizing the right kind of con at a time when so much of our daily despair is caused by the wrong kind of con. In a political moment that's left a lot of us feeling powerless and nihilistic, you can see why watching Delvey exploit the sillier parts of elitism for her own gain can seem like a small way to take back control. It's like vigilante social justice.

As Tolentino put it, “[Delvey] was a perversely relatable striver: she was us, just with more energy (and, possibly, a knack for forging or repurposing bank documents).”

Well, the pitch-black irreverence is kind of the point of the Summer of Scam. While low-key cheering for swindlers is ethically dubious, you could argue that the story of Anna Delvey would actually be less interesting if someone had gotten hurt. No one died as a result of her actions, she just made rich people look like idiots.

The problem with that argument, of course, is that her crimes weren't actually victimless. Just ask the author of this Vanity Fair article, one of Delvey’s “friends” who got stuck footing the bill for a $62,000 vacation she couldn’t afford after Delvey’s promise to pay her back never happened. It's easy to leave out the part of the narrative in which some scammers' victims are also relatable, and this story highlights one of the big issues with commending cons: Scammers aren’t as discerning as we’d like them to be, and trying to make a Robin Hood out of a grifter is going to be disappointing.

Still, at a time when it seems like nothing matters, the crimes of scammers don't seem that bad. Anyway, they're certainly not as bad as separating migrant children from their parents and housing them in overcrowded tent cities.

How can I participate in Grifter Season?

There are plenty of ways to get in on the action that don't involve actually scamming. First and foremost, start following along with the stories of other scammers. I heard the Fyre Festival guy just got busted again. Or you could check out the lady now dubbed the “Portofino Pirate" after she was arrested in Italy for trying to steal a yacht. And my personal favorite scammer, the disgraced tech entrepreneur Elizabeth Holmes, just got indicted, so I recommend keeping an eye on that—it's very Summer of Scam-y.

You could also try out a scammer beauty look, like Estelle Tang over at Elle did. It's mostly bold eyeliner and, unlike a heist, it's almost universally easy to pull off.

Me? I was thinking of starting a podcast just for the subscription to Blue Apron that I assume comes with it. It's kind of a long con, but Summer of Scam's got me feeling inspired.