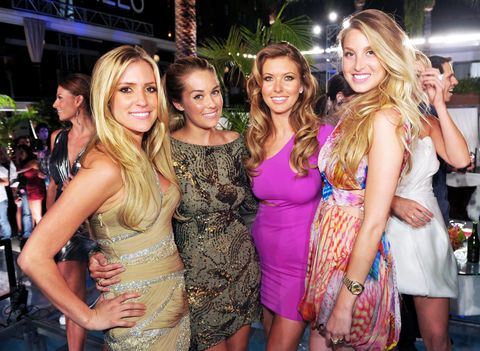 Though it’s been rumored for awhile, we finally got confirmation at the 2018 MTV VMAs that The Hills would be coming back for a reboot. The news was dropped by way of Audrina Patridge’s red carpet hint about an “announcement,” followed a mysterious commercial played toward the end of the broadcast, featuring the telltale “Unwritten” theme song. This time, the track was a pretty acoustic duet, rather than Natasha Bedingfield’s 2004 bop.

Now for what we know about the new show: It’s official title is The Hills: New Beginnings, and it’s slated to premiere in 2019. Though there’s no official announcement about who’s going to be on the show yet, the members of the original series present at the VMAs for the announcement included Patridge, Spencer Pratt, Heidi Montag, Justin Bobby, Jason Wahler, and Frankie Delgado. No Kristin Cavallari, so we’ll see if she shows up. (She has her own show, Very Cavallari, to look after, though.)

See the announcement below:

This content is imported from YouTube. You may be able to find the same content in another format, or you may be able to find more information, at their web site.
This content is created and maintained by a third party, and imported onto this page to help users provide their email addresses. You may be able to find more information about this and similar content at piano.io
Advertisement - Continue Reading Below
More From Culture
'Bachelor In Paradise' 2021: Everything We Know
Hang On, What's "ROC" at the Olympics?
Advertisement - Continue Reading Below
Obsessed With the Olympics? Read These Books
The 'Friends' Cast Just Dropped Iconic Merch
Twitter Is Obsessed With Greg on 'Bachelorette'
You're About to Hear a Lot About Athing Mu
Meet the Cast of Katie's 'Bachelorette' Season
Blake Moynes Has a Thing For 'Bachelorette' Leads
'Skye Falling' Should Be on Your Summer TBR List
What Makes an Olympic Moment?