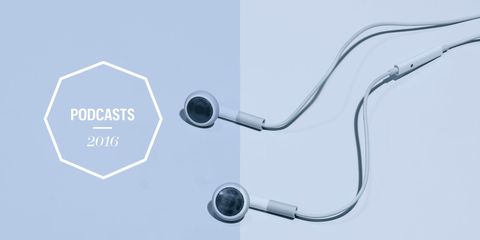 When 2014's Serial came out, Adnan Syed's story was virtually inescapable. And if you weren't up to date on your latest episodes, you were as subject to spoilers as the latest GoT. But while the end of Season 2 has left a Serial-shaped hole in our heart, there are new shows cropping up all the time (this is the golden age of podcasting after all). To help you sift through them all, below, find the best new storytellers and entertainers in the podcasting world in 2016 , here to stave off the Humpday blues and keep you up-to-date on the latest watercooler talk.

If there's any must-listen crime drama podcast that's launched after Serial, it's In the Dark. Peabody Award-winning reporter Madeleine Baran narrates this story documentary-style about a young boy in rural Minnesota named Jacob Wetterling whose abduction went unsolved for 27 years. By this time, we already know who committed the crime, but much like the widening circle that Baran uses to describe how the investigation grew to a larger statewide search, the strength of the podcast is how it uses this case as a lens to focus on wider police incompetence.

From the podcasting company that gave us groundbreaking shows like Reply All, Gimlet's first fiction podcast—a new podcasting genre which got its legs this year—stars the Internet's boyfriend Oscar Isaac, David Schwimmer, Catherine Kenner, and Amy Sedaris as voice actors for this psychological thriller. The non-linear story, told with flash-forwards in time, revolves around a mysterious "Homecoming Initiative" that reintegrates returning soldiers into society. It sounds much like a series of intercepted phone calls (with all the swirling background noise and chatter), so just imagine Oscar Isaac softly murmuring in your ear.

Sometimes the best way to understand a complex situation is from the inside, which is why The Ringer's new Keeping it 1600 podcast is essential in a presidential term where we'll witness unprecedented changes in government. The Washington insiders that host the show include former Obama aides Jon Favreau, Dan Pfeiffer, Jon Lovett, and Tommy Vietor, who gather to shed light on current affairs like Trump's recent Cabinet appointments and how the press should cover the president elect.

For all those with their finger poised over the refresh button on the Daily Mail front page or those with an unhealthy relationship with gossip rags, 'Who? Weekly' is exactly what your starved attention span deserves. Covering the greasy grouping of D-Listers who make you go, "Who?" the humorous Tumblr-turned-podcast comes courtesy of Vulture alum Lindsey Weber and Jezebel writer Bobby Finger.

With episodes ranging from essential topics like dad bods, peen hunting, and boob sweat, 2 Dope Queens is your trusted source for hilarious commentary on all things culture. Cohosted by The Daily Show's Jessica Williams and Broad City adviser and comedian Phoebe Robinson, the pair riff off of cultural moments (recent and random), followed by guests (usually comedians and writers) who round out the hour with stories. The hilarious banter is necessary listening for fans of Ann Friedman's Call Your Girlfriend, but if you're craving more of the same, check out Robinson's YouTube series "Woke Bae."

This year, the popular New York Times column about love and relationships—edited by Daniel Jones—became a WBUR podcast, with actresses and celebrities reading stories (ranging from the hopeful to the utterly weepy), to updates from the essayists themselves.

MTV News added a handful of new podcasts on news and pop culture this year, but one of the best and latest is one that handles #thepatriarchy, specifically women's problematic role in Hollywood. Hosted by MTV writer Rachel Handler and featuring Rookie alum Hazel Cills, the show interviews celebrities and writers on their "lady problems" in the entertainment business, without pulling any punches.

A spin-off series from Radiolab, More Perfect examines the fascinating workings behind RBG and the Supreme Court at-large. Don't knock it until you've tried it, if the concept sounds terribly dry and boring to you. Even if you're not into law, it's especially compelling to hear about the backstories behind historic rulings and the origin of judicial terms like "cruel and unusual."

A must-listen for Shark Tank fiends and aspiring entrepreneurs, the new NPR podcast How I Built This dives into the conception story behind products like Spanx to media conglomerations like Vice Media. Bookmark for all of your creative inspiration and career advice.

All in the favor of learning more about the obscure, Gimlet's new Science Vs. examines the way we understand complex subjects like fracking and gun control, plus the G-spot (you know you're curious).

Advertisement - Continue Reading Below
More From Culture
When Michelle Carter Is Expected to Walk Free
How Much Time Did Michelle Carter Get in Prison?
Advertisement - Continue Reading Below
'Bachelor' Peter Made a Hilarious Video As a Kid
31 Movies That Are Only About Sex
Who Is 'Bachelor' Contestant Mykenna Dorn?
The Best Love Songs of 2020 (So Far)
A New Show About the Royals Is Coming to HBO Max
The Ultimate Valentine's Day Playlist
Chelsea Clinton Announces 3rd 'She Persisted' Book
Who Is 'Bachelor' Contestant Kelley Flanagan?