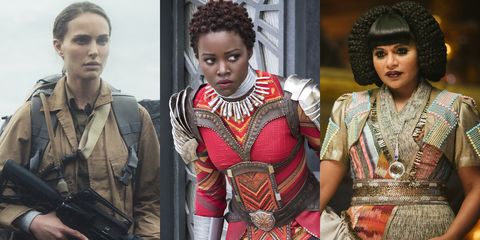 In a recent anthology, edited by Lisa Yaszek and called The Future is Female!, 25 science fiction stories written by women between 1920 and 1969 imagine worlds very different from our own. What those worlds look like—be they cyborg-centric, egalitarian, or dystopian—varies, from a 1930s pulp tale by C.L. Moore to a piece by the late, great Ursula K. LeGuin penned at the end of the 60s. It’s an impressive and super fun-to-read collection that’s well worth picking up, and what it will leave you with (other than the notion that the future ain’t what it used to be) is the sense that women have always been into sci-fi—and they’ve been good at it.

So why does 2018’s spate of female-fronted sci-fi movies still feel so revolutionary? Maybe it’s that in a lot of STEM-adjacent fields (even fictional ones), women have always been deliberately kept away from the action. Recall, for instance, that in 2001: A Space Odyssey—often considered the apotheosis of sci-fi—most of the women are, like, flight attendants...and that’s it. There’s nothing wrong with being a flight attendant, of course, but the point is that even when given endless possibilities, a lot of people are still very comfortable imagining that women will always serve men (and not in the fun Twilight Zone way).

Below are some of the best sci-fi movies of 2018 that feature female leads (okay, some of them aren't leads but rather women characters who steal the show). It’s not a comprehensive list, but it’s almost comprehensive—even comic book movies, the last bastion of mainstream supersexism, have gotten more equal in the last few years. Movies are getting better at inclusivity, and that's making them better in general. Let’s consider that progress—for women in sci-fi and audiences alike.

One of the best sci-fi movies in recent memory is this creepy thriller from the writer of Ex Machina. Natalie Portman plays a biologist whose husband is injured in a covert military operation, so she leads a team of explorers—among them Tessa Thompson, Gina Rodriguez, and Jennifer Jason Leigh—into the mysterious, growing, oil slick–colored mass they call The Shimmer. The world these tough-as-nails women find beyond it is as beautiful as it is horrifying.

A teenage girl (Sophie Thatcher) and her father (Jay Duplass) are miners looking for a rumored payload of gems on a nearby moon. They encounter rival prospectors who separate them. On her wits alone—and with only a criminal as a companion—the girl must fight her way back to safety. The dynamics of the world set up here are fascinating and realistic, and though it’s a sci-fi plot, it feels as gritty and familiar as an old-timey Western. It’s like True Grit in space, complete with the badass young woman lead.

Based on a graphic novel of the same name, this film follows the troubled young Barbara (Madison Wolfe), a Dungeons and Dragons fanatic who also believes that there are giant monsters on their way to destroy her hometown and only she (and, soon, her bestie Sophia, played by Sydney Wade) can stop them. Barbara is a complicated character, but one whose bravery is easy to root for—even if it may or may not be based on a fantasy.

Okay, so this is technically about the entire family, but this sequel to Pixar’s hit 2004 film focuses a lot more on Elastigirl, who has been chosen to be the face of superheroism after the practice is outlawed. She’s funny, flawed, and racked with guilt over having to choose between family and career—even with the superpowers. Science fiction that's pretty darn relatable, actually.

Ant-Man and The Wasp

As mentioned above, superhero movies got a lot more women-friendly this year, and the hilarious and better-than-it-has-any-right-to-be Ant-Man and The Wasp is proof positive. Ant-Man (Paul Rudd) teams up with fellow superinsect The Wasp (Evangeline Lilly) to help track down her mother, who has disappeared into a subatomic realm. It’s about time a woman gets at least equal billing as a man in this massive cinematic universe (that is, until Captain Marvel comes out next year).

A Wrinkle in Time

Ava Duvernay directed this modern adaptation of Madeleine L’Engle’s iconic novel about a young girl searching for her father in a topsy-turvy dimension. To help her, she’s guided by three supernatural beings named Mrs. Whatsit, Mrs. Who and Mrs. Which—played here by the triumvirate of Reese Witherspoon, Mindy Kaling, and Oprah. It’s a lot of powerful women in one movie. Maybe too many? Nah.

Look, I know what you're thinking: The titular Black Panther and the key nemesis Kilmonger are both men. Right, right. But did you watch this movie? Powerful women run Wakanda, from brilliant doctor-inventor Princess Shuri (Letitia Wright) to Okoye (Danai Gurira), leader of a squad of all-female warriors who protect the country and hold their duties above everything (and everyone) else. Even King T'Challa's love interest, Lakia (Lupita Nyong'o), is more interested in her philanthropy than she is in marrying the megababe Black Panther. This is a feminist superhero sci-fi movie if I ever saw one.

When a creature that causes people who see it to kill themselves takes over the world, a woman (Sandra Bullock) must fight for her life and the lives of her two children, taking them deep into the woods while completely blindfolded. But monsters aren’t the only danger lurking in this scary new world. This movie is protective mama bear tendencies, cranked up to 11.

A surprising entry into the often questionable Transformers series, this movie seems like it has a lot of heart. Set in the late-1980s, Charlie (Hailee Steinfeld) finds a cute yellow Volkswagen Beetle in a junkyard and gets it back to working order. But she soon finds out that her new Bug is actually a transforming robot—albeit a really sweet and supportive one—who has been charged with saving the world.

For celebrity news, beauty and fashion advice, savvy political commentary, and fascinating features, sign up for the Marie Claire newsletter.