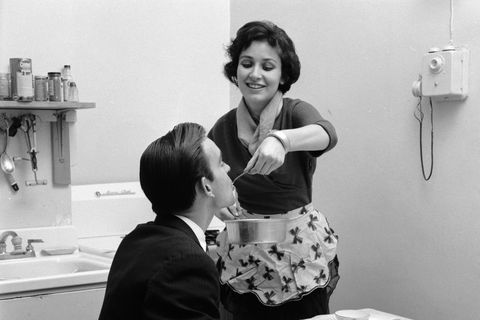 Maybe this shouldn't have come as a surprise. Any sentient being who watched Donald Trump, a self-proclaimed groper of vulvas, beat Hillary Clinton, a notorious vulva owner, to become President of the United States could guess that maybe gender relations are a little wonky in the twenty-first century. One step forward, two steps back.

Still, it's surprising to read that a new study has learned millennials are trending away from a preference for gender equality in their households. The Council on Contemporary Families presented a finding this week that today's young people are less likely than young people of the 1990s to desire equality between spouses.

How did we get here? A survey called Monitoring the Future has been distributed to tens of thousands of high-school students each year since the 1970s, and academics have noticed a stall and actually a regression in gender equality—not in the workplace, where young people want men and women to be treated equally, but at home.

There were two questions that garnered this conclusion. When asked if they agreed or disagreed with the statement, "The husband should make all the important decisions in the family," 63 percent of teens disagreed. In 1994, 71 percent disagreed.

When shown the statement, "It is usually better for everyone involved if the man is the achiever outside the home and the woman takes care of the home and family," only 42 percent of today's young people disagreed. In 1994, 58 percent disagreed. TL;DR, this result suggests that the majority of teens think it's better when the woman stays home.

"These results are puzzling because population demographics are changing in ways that might be expected to produce greater support for egalitarian principles," study authors Joanna Pepin, PhD, and David Cotter, PhD wrote. "Families are increasingly likely to count on mothers' employment for economic stability, whether youth grow up in dual-earner households or single-mother families...We are left, then, searching for explanations in the realm of culture."

What the heck happened in 1994 and 1995 to create this 20-year slip? Feel free to start analyzing, or you know, bashing your head against a wall. Just make dinner for your husband first.