Spoilers for the Netflix series Unbelievable ahead. With Friday's release of the Netflix eight-part limited series Unbelievable, fans of television shows like True Detective and I Am the Night have another title to add to their watchlist. The latest Netflix offering, in the vein of the true-crime genre, takes its audience down a dark and winding path of a real-life sexual assault investigation that played out over the course of several years.

Unbelievable is a close television adaptation of a 2015 Pulitzer Prize-winning article called "An Unbelievable Story of Rape" by journalists T. Christian Miller and Ken Armstrong for American investigative site ProPublica about the troubling rape case involving a teenager in Lynwood, Washington.

When the teen (named Marie) first went to the police with her story in 2008, things quickly escalated. The more that the officers investigating the case prompted her to explain exactly what happened to her, the more difficult it was for Marie to keep the details of her story straight. Her inconsistent testimony, combined with inadequate physical evidence of the assault and what officers found to be an unconvincing reaction to the alleged attack, led to the police department dubbing the story as false. The officers pressured Marie for answers, and she broke, first saying that her rape was a dream and then that it was a complete lie made up because she wanted attention. She was subsequently charged with false reporting.

Facing potential jail time—giving a false statement to the police is a misdemeanor punishable with up to a year in jail and substantial fines—Marie took a deal offered by the Lynwood police department. As part of the deal, she would be required to undergo counseling, be under supervised probation for a year, and pay a hefty fine. The public shame of being branded a liar by the police and the people who knew her best, as well as the festering trauma from her brutal rape, left the 19-year-old feeling desolate and alone.

Around the same time in Denver, Colorado, Detective Stacy Gilbraith was hard at work investigating a number of rape cases in the area that she believed were committed by the same attacker. The assailant had a standard modus operandi: Wearing a black mask, tying his victims up, and threatening them with lewd pictures he'd taken of them. A passing conversation with her husband David, a fellow police officer working in the nearby town of Westminster, revealed to Detective Gilbraith that the testimonies of the victims almost exactly mirrored those of another woman in Westminster. Gilbraith teamed up with her husband's co-worker, Sergeant Edna Hendershot, to see if they could uncover a connection.

Related Story
You Need to Watch Kaitlyn Dever in 'Unbelievable'

Gilraith and Hendershot spent thousands of hours poring over the evidence and picking apart their victims' statements to see how the cases were linked until they finally landed on a likely suspect: a 30-year-old Army veteran named Marc O'Leary. Ultimately, it was a distinctive birthmark on O'Leary's leg that gave him away, as described by one of his victims. He was charged with 28 counts of rape and related felonies in Colorado and sentenced to more than 300 years of prison for his crimes, never to see the light of day outside of a cell.

Among the damning evidence the detectives found in O'Leary's home was a photo of a teenager that Gilraith and Hendershot would later identify to be Marie. Marie herself wasn't notified of the news of her attacker's arrest and imprisonment until two years after her own attack, after she'd already fled Lynwood for Seattle in order to escape the stigma that followed her around town. She sued the city for her emotional distress and public humiliation and settled for $150,000.

Although it's more so a dramatization of the events of the Lynwood investigation rather than a straight-up documentary (Booksmart actress Kaitlyn Dever stars as Marie Adler in the film, and Toni Collette and Merritt Wever play the two female officers that relentlessly pursue the case and inadvertently clear Marie's name), Unbelievable is nonetheless a harrowing and incredibly timely story to share in the age of #MeToo. Rape culture creates a society in which violence against women is normalized and shoulders us with the responsibility of bearing the blame for our victimization, its insidious nature even creating bias in the minds of those whose job it is to serve and protect us. Marie's story provides a stomach-turning glimpse into the troubled state of our current criminal justice system in regards to its historical (mis)management of rape and sexual assault cases, telling the cautionary tale of what happens when the world refuses to believe women.

Unbelievable is now available for streaming on Netflix. 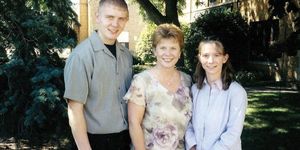 I Was Kidnapped and Raped by My Neighbor
Ineye Komonibo Ineye (in-NAY-yay) Komonibo is the editorial fellow at MarieClaire.com.
This content is created and maintained by a third party, and imported onto this page to help users provide their email addresses. You may be able to find more information about this and similar content at piano.io
Advertisement - Continue Reading Below
More From TV Shows We're Obsessed With
'Haunting of Hill House' Will Return Soon
Where You've Seen the Cast of 'Away' Before
Advertisement - Continue Reading Below
Fans Are Clamoring for a Second Season of 'Away'
The Best Korean Dramas to Get You Hooked
It's Time to Catch Up on HBO's 'Succession'
'The Undoing' Is Fall's Most Thrilling Drama
'Emily in Paris' Is Your Next Binge-Watch
The 'Lovecraft Country' Soundtrack Is Scary Good
The Best Shows to Stream on Every Platform
'Unsolved Mysteries' Season 1, Volume 2 Is Coming