Today's Top Stories
1
And Now, a Word From the Future Voters of Iowa
2
Read 'Followers' With Us in February
3
Untangling Hair Bias
4
Blake Lively Made a Glam Return to the Red Carpet
5
Found: The Best Night Cream for Your Skin Type
Craig SjodinGetty Images

On this week's episode of Dancing With The Stars, Sean Spicer leaned into his politics background and set up a "Spicer/Arnold 2019" DWTS campaign to urge viewers to vote for himself and partner Lindsay Arnold. The scene was presented as a skit, but the campaign is serious (well, as serious as a politics-style campaign on DWTS can get)—there's a Spicer/Arnold 2019 website, even, and a campaign video to boot.

In the skit-style intro, Spicer is seen driving through the streets urging strangers to vote for him and Arnold—you know, just like the full-time political campaign that is Trump's presidency that Spicer handled from his position as White House Press Secretary. (It's about as subtle as a blow to the head, that skit.) He also showed off a variety of Spicer/Arnold memorabilia, like T-shirts and yard signs, which I have a bad feeling will show up on the campaign website any day now.

The campaign video goes further, declaring in a dramatic voiceover:

For 28 seasons, Dancing With The Stars has had plenty of great dancers, full of rhythm and moves. This fall, let's finally vote for someone who represents people like us. Whether it's the waltz, the cha-cha, salsa, or freestyle, Sean Spicer is the dancer we can be proud of. He will do whatever it takes to bring home that mirrored ball. "I will fight for every American who's been overlooked and forgotten because they act rhythm and moves." This fall, vote Spicer/Arnold. "I'm Sean Spicer, and I approve this message."

It's a little endearing—as all campaign videos are designed to be, lest we forget—because the narrator speaks over spliced footage of Sean Spicer falling over repeatedly and generally failing to keep either rhythm and moves, which is something I, myself, and probably plenty of Americans, can relate to. But this is Sean Spicer, people. Stay focused!

This week, Spicer wore a tamer shirt than last week's lime green monstrosity, which was...a relief. The judges said, without apparent irony, that he had improved vastly from the week before, which is the equivalent of getting the "Most Improved" trophy at summer camp and knowing that means you weren't great at the sport start to finish (what, me?).

Clearly, Spicer is a little worried about votes tonight. Earlier today, he sent out an email blast asking for votes for his birthday:

Utterly tragic email from Sean Spicer: “PS- today is my birthday and all I'm asking for this year is your votes.” pic.twitter.com/wT2Bb4Z9ow

Spicer's turn on the show has been a source of controversy. The former White House press secretary, notorious for innumerable lies told with a straight face from the podium, was an unpopular choice for host Tom Bergeron. Bregeron tweeted when the lineup was announced: "[It was] my hope that DWTS...would be a joyful respite from our exhausting political climate and free of inevitably divisive bookings from ANY party affiliations." Clearly, not to be. 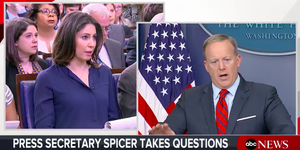