When it came to our TV screens on July 3 via Disney+, award-winning musical Hamilton was able to reach new audiences who weren't able to see the original play. One of the most diverse musicals in Broadway history, Lin-Manuel Miranda's Hamilton cast up-and-comers like Daveed Diggs, Renée Elise Goldsberry, and Leslie Odom Jr., and re-imagined white historical figures with immensely talented actors who are Black, Indigenous, and people of color. This is—as some critics are now pointing out—the beloved musical's biggest strength, and also its biggest challenge.

The most notable argument being made: That a number of the white historical figures in the musical, including perhaps Hamilton himself, owned slaves. This is something Miranda addresses obliquely in the musical but that Hamilton doesn't fully reckon with (although, again, the recasting changes the nature of the story they're telling, so it's a complex reframing). The dialogue about that aspect of the musical began during the musical's heyday and has now been brought back into the public consciousness, especially since we are now living in a very different time: Hamilton originally came out in 2015, during the last years of the Obama presidency.

Historians, fans, and even Miranda have weighed in on the controversy.

What is the Hamilton controversy about?

The extensive New York Times FAQ is really worth your time, if you want a full explanation of all the things that Hamilton may have glossed over, chose not to cover, or changed. But a few standouts:

Yep. Bought/owned. Believed in manumission, not abolition. Wrote violent filth about Native people. Believed in only elites holding political power and no term limits. And the banking innovation has troubled roots. That’s why I don’t look to art for my history. I study history. https://t.co/CNnjOWMnyq

She later clarified in a comment that while Miranda chose not to centralize slavery, "he didn’t deny or ignore it either. He made his choices about it. I greatly enjoyed the work and was wildly curious after watching. I wouldn’t have studied any of those 'founders' like I did if it wasn’t for #Hamilton and @Lin_Manuel."

And that's sort of the point a number of critics have drawn—that the energy and care of the storytelling, as well as the enthusiasm and diversity at its core, mean that more people learned about the historical figures who were represented. Arguably, the musical is less about the figures and more about history:

Last word on #hamifilm - love reading fellow historians’ insightful takes & info but I never thought #hamilton was abt A Ham (or TJeff or Geo Wash) - rather it’s abt history itself - hard, elusive, contradictory & a powerful instrument. #WhoTellsYourStory https://t.co/bKjuoatk2l

And the play itself brought opportunities for BIPOC actors, which is to be celebrated and emulated.

Writer and "Strong Black Legends" podcast host Tracy Clayton posted a thread in which she laid out her thoughts. The full thread is here, but a few quotes: "i really like that this conversation is happening. hamilton the play and the movie were given to us in two different worlds & our willingness to interrogate things in this way feels like a clear sign of change." She said she appreciated the criticism of a play about slaveholders that doesn't focus on slavery "but i flex the same muscle i use when i listen to hip hop as a black woman. we enjoy problematic things all the time." She explained that a second step to the play could be a nuanced discussion. "hamilton is a flawed play about flawed people written by an imperfect person that gave my flawed and imperfect little life a big boost when i needed it most, so again i know im biased...but i do appreciate the change this illustrates."

Appreciate you so much, @brokeymcpoverty. All the criticisms are valid. The sheer tonnage of complexities & failings of these people I couldn’t get. Or wrestled with but cut. I took 6 years and fit as much as I could in a 2.5 hour musical. Did my best. It’s all fair game. https://t.co/mjhU8sXS1U

He explained that "all the criticisms are valid" and that he, too, wrestled with the immense complexity of the subject. "I took 6 years and fit as much as I could in a 2.5 hour musical. Did my best." 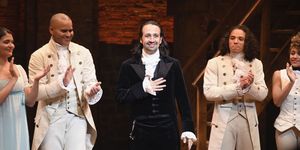 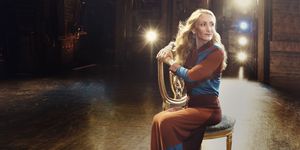 Meet Woman Who Helped Bring 'Hamilton' to Stage
This content is created and maintained by a third party, and imported onto this page to help users provide their email addresses. You may be able to find more information about this and similar content at piano.io
Advertisement - Continue Reading Below
More From Culture
'Detransition, Baby' Is as Good as Everyone Says
The Most Awkward Moments of the Globes
Advertisement - Continue Reading Below
Don't Miss New Film 'Nomadland'
Chadwick's Wife Accepts His Golden Globe
'Bridgerton' Was Snubbed at Golden Globe Noms
The Globes "White Hollywood"Controversy, Explained
'Behind Her Eyes': Is Astral Projection Real?
The Book-to-Movie Adaptations to Catch This Year
The Best Easter Egg in 'Behind Her Eyes'
Breaking Down the Ending of 'Ginny & Georgia'