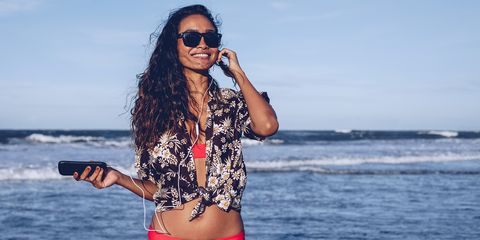 Every summer, artists emerge from musical hibernation to give us what we desperately need: new jams. Yes, warm weather is still months away, but to get you in the spirit, here are our predictions for the hits that will be virtually inescapable this summer. Prepare to hear every song below blasted from car radios, on dance floors, and at bars and BBQs in the sunny months to come.

The original song made its debut on Bruno Mars' album "24K Magic" back in 2016, but this January, he released a remix of it featuring Cardi B. The song/music video will have you feeling like you're guest-starring in an episode of The Fresh Prince of Bel-Air or Saved by the Bell.

"Never Be the Same" - Camila Cabello

Camila Cabello's sexy, upbeat song could be the summer anthem you never knew you needed—provided you're attempting to get over a boyfriend via a summer fling. (Plays on repeat.)

You're either a fan of Drake, or you'r crazy for not being one. His newest single came out in February, and it's still stuck in our heads. Watch Drake generously pass out nearly $1 million in his music video to people around Miami. Now every time you listen, that's all you'll think about.

"After the Storm" - Kali Uchis feat. Tyler, The Creator and Bootsy Collins

You know you loved Kali Uchis and Tyler, the Creator's "See You Again" collaboration. The pair continued the streak with this funky retro tune, which we can already picture ourselves listening to on a chill summer day.

Roll your windows down and prepare to belt out Rudimental's tune every day this summer. Everything from the drum, to the bass, to the insanely catchy lyrics scream a weekend spent at the beach.

Calling it now: "The stir fry" will be the trending dance move of this summer (long live the whip and the dab). The lyrics, "in the kitchen, wrist twisted like it's stir fry," sound like something someone more rhythmically inclined than me could easily turn into a dance.

People might be hating on JT's new singles from his album "Man of the Woods," but you can't deny the fact that this chorus is pretty catchy. Think: Coldplay meets country. If that's not enough to make you add it to your summer playlist, we don't know what is.

"All the Stars" - Kendrick Lamar and SZA

We were pumped when this Kendrick-SZA single for the movie Black Panther came out. Not only do we get to hear a new style from Kendrick, who's usually rapping at a speed of 90 WMP (words per minute), but its upbeat vibes are a good reminder that summer is coming sooner than we think.

Taylor's latest single dropped this month and people are convinced the song is about her hiatus from the public eye (and maybe her BF Joe Alwyn too). The tone of the song is reminiscent of 2000s T. Swift music, which is one throwback we can get behind.

You're going to want to download this powerful song by Carrie Underwood, featuring Ludacris, ASAP. It was used for both the Super Bowl and the 2018 Winter Olympics, and its inspiring, uplifting beat will keep you energized all summer.

Although it technically came out in 2017 (one week before the new year), we're giving the Bronx-native's song a free pass to join this summer playlist. Cardi B rose to fame with her song "Bodak Yellow," and she continues to impress us with everything else she releases. We have a feeling we'll be hearing this song and many more from her this summer.