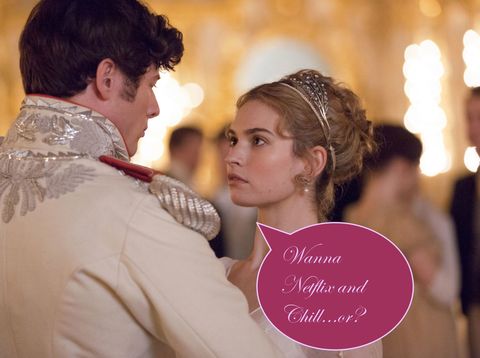 When you think of modern dating, you don't usually think of 1,225 page novels by bearded Russian writers who spent their free time looking like this:

But before Sex and the City was shedding light on the complications of coupling up, Tolstoy was over in Russia penning the 19th-century version of a cable TV drama. Anyone who's been watching the Lifetime miniseries knows War & Peace is basically a soap opera starring men in furry hats who woo women in similarly furry hats, while illustrating some valuable (and surprisingly contemporary) dating lessons. Including but not limited to: when given the chance to make out in the snow, take it.

If War & Peace has taught us one thing, it's that we should have an equal-opportunity disdain for both the player and the game. Poor Sonya Rostova (played by Aisling Loftus) is learning this lesson the hard way thanks to her unyielding crush on her cousin, Count Nikolai (Jack Lowden)—a man who openly flirts with other women and once told her, "I've fallen in love before and I expect I will again." Uh, romantic? To be fair, it was cute when Nikolai went against his parents wishes and proposed, but still: if your boyfriend says he's into other women, time to move on. Also, maybe don't date your cousin.

Due to #ThePatriarchy, the women of War & Peace tend to spend their time at home while their boyfriends gallantly fight in hilariously large hats. This means almost all the primary relationships are long distance, and most are strained at the best of times. Take Sonya again: she spent months pining for Nikolai when she could have been out living life and perfecting whatever the 19th-century version of an OK Cupid profile is. Lesson learned: don't wait for your date.

3. Your first love *probably* won't be your last love.

When the characters in War & Peace fall, they fall hard. Hard—like "let's get married even though the only thing we have in common is the ability to eye-sex on the dance floor" hard. Relationships lacking a strong foundation tend to burn out, a fact Natasha learns when she falls for Prince Andrei and then is like, "meh, forget it, I wanna live in the woods" once he peaces off to Europe.

4. A sexless relationship is reason to bounce.

War & Peace's lovably earnest protagonist, Pierre (Paul Dano), might be Uncle Scrooge-ing it when it comes to wealth, but his wife (Tuppence Middleton) has no sexual interest in him whatsoever, and their relationship suffers because of it. Yes, Princess Helene's sole purpose is to make Pierre miserable, but there's something deeper to be said here. Sex is a normal part of healthy relationships, and if you're not having it, it might be time to 👋👋 👋.

5. Your best guy friend will inevitably announce his love for you.

Oh, you thought you and your roommate were best buddies who would never cross that invisible line? Nope, s/he's been pining for you this entire time. Case in point, this conversation between family friends Denisov and Countess Natasha:

Denisov: "I think about you all day, dream of you at night."

Much like the rest of us, couples in old-school Russia spent their time scrolling through their texts and obsessively checking Instagram. By which we mean staring vacantly out the window waiting for carriages and/or trolling the mailman. The complete absence of chill is all too familiar, which is ironic given how cold winters are there.

Fact: Dolokhov literally cannot stop flirting with (and in Helene's case, sleeping with) his friends' wives/girlfriends. This is a terrible idea no matter what century you're inhabiting, and one that landed Dolokhov in a shoot-out. This guy was literally almost murdered for sleeping with Pierre's wife, and he still went and proposed to Nikolai's girlfriend.

This content is created and maintained by a third party, and imported onto this page to help users provide their email addresses. You may be able to find more information about this and similar content at piano.io
Advertisement - Continue Reading Below
More From Culture
Watch the 'The Morning Show' Cast Play Trivia
'The Great British Baking Show' Is Coming Back!
Advertisement - Continue Reading Below
Fans Are Already Clamoring for 'Sex Education' S4
Gina Yashere Shares Her Fav Black Female Authors
The 69 Most Graphic and Gorgeous Sex Scenes on TV
I'm Obsessed With the Ted Lasso Cast at the Emmys
All the Deets on Michelle's 'Bachelorette' Season
'Bachelor In Paradise' Spoilers: Your 2021 Guide
'Bachelor In Paradise' 2021: Everything We Know
Taraji P. Henson Hints She Might Release Music