Of all the richly drawn, strong-yet-stifled women at the heart of The Handmaid's Tale, nobody changes more drastically over the course of one season than Janine. Played by 25-year-old Madeline Brewer, she's precariously balanced on the edge of gutsy and naïve—when she stands up to Aunt Lydia (Ann Dowd) at the Red Center, Janine is the show's first example of exactly how brutal this regime can be: as punishment for her insolence, her eye is gouged out.

What follows is a dizzying arc by any measure. Janine's trauma causes her to regress to a childlike state punctuated by flashes of pure rage. She becomes pregnant, delivers a baby she must give up as soon as she's done breastfeeding, and falls in love with her Commander—who has made her the kinds of promises men make to their pregnant mistresses. "Some days it felt difficult to find Janine," Brewer tells MarieClaire.com of her character's extreme circumstances. "It took more work on my part to figure out what headspace she should be in today."

In the show's penultimate episode, released yesterday, Janine's storyline reaches a devastating climax. Finally confronted with the reality that her Commander is not going to leave his wife for her, and forced to start from square one as Handmaid to a new family, Janine hits her breaking point. Here, Brewer discusses her character's final choice, how the pain of victim-blaming led her to this point, and why seeing her resist rape by a new Commander was a breath of fresh air.

On why Janine resists her Commander in episode 9—which marks the first time "the ceremony" is explicitly filmed as a rape scene:

"I was trying to figure out why Janine freaks out this time, and I realized it's because she had an attraction and a relationship with Warren. It didn't feel like rape to her with Warren—it felt like love, it felt like intimacy. That ceremony scene is important because I feel like Janine's reaction is the reaction you want her to have, and you've wanted June to have had for the entire show. When you watch those scenes, Offred's face is blank, and you're like 'Give me something, let me know how terrible this is for you!' But she can't show it. So when Janine does, it allows you to take a breath. You think 'Thank God somebody's doing this', but then you also see at what cost."

On Janine's history of sexual abuse, and her story being a parable about the damage of victim-blaming:

"Janine spent the last 10 years of her life trying to overcome a horrific thing that happened to her, and was then told by a roomful of people that it was her fault. It's another interesting layer to play because what was ultimately a gang rape and ultimately something that just destroyed Janine for a time, started out as Janine thinking that a boy liked her. That's why she's so vulnerable to believing Warren, she just wants to be loved. Especially after she's had her eye taken out, for someone to tell her that she's beautiful and wants to run away with her and have a family—that's all she ever wanted and she's never felt like she deserved it. She's especially susceptible to him, which is what happens when you blame a victim. They feel that they deserved it, or there's something they could have done, that if they'd done something different or were someone else, it wouldn't have happened to them. It was extraordinary to play, but heartbreaking to me that anyone has to go through this."

On why Janine threatened to jump off the bridge with her baby.

"She knew she'd never be able to do it. Janine is so with it in that moment, she's so aware, and she knows exactly what she's doing. She's never been all that crazy—she just needed a way out. By stepping up on that ledge with the baby in hand, no one's coming near her, no one's gonna shoot her down, and she has a moment to really get their attention and say her piece. All of Warren's lies, everything that's been done to her, everything she's suffered—she just lets that wound fester for a while before other people get there. She's not even sad any more, she's just pissed. When she jumps, she knows that she wants to go, and she knows this isn't a life that she can handle."

"It was extraordinary to play, but heartbreaking to me that anyone has to go through this."

On Janine occasionally being an unexpected source of comic relief:

"I loved her line [about] because on the one hand, you're like 'You know what? Kind of!' Janine's mind isn't consumed by My god, we're washing a dead person's blood off the wall, why are we doing this, thank God it's not my husband like Offred's is. She simply thinks about what's right in front of her at this moment. How can she take that in and turn it into something that is palatable for her? She dissociates as a defense mechanism. In order to make it through every day, she has to look at the world as a child might, and force herself to be full of wonder. She has to find the small joy in things, because otherwise she'll never make it."

On Aunt Lydia's tenderness towards Janine:

"Ann and I worked together on the first movie I ever did [2016]. I was going through a lot in my life at the time and she was a real mentor to me, so I think coming into The Handmaid's Tale, our existing relationship made it that much more rich on-screen. In the book, it's more that Janine is a teacher's pet and a tattle-tale—and obviously everything is from Offred's point of view. In the show, you have the opportunity for intimate moments between Janine and Lydia where you see their individual humanity." 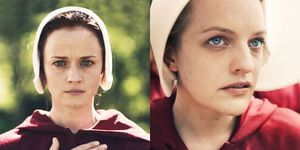 On Aunt Lydia calling Janine by her real name instead of "Ofwarren":

"It's so powerful, because that's when Janine listens. You can give these people new names, you can put them in identical clothes, you can gouge out their eyes, you can do any number of inhuman things to them—but Janine is still who she is. Hearing her own name allows Lydia to connect to her."

On what we can expect from the show next:

"I personally would love to see more of the colonies, and to round out the world in general. What is an un-woman? And we know why Handmaids are Handmaids, but why are the Wives the Wives? Why are the Aunts the Aunts? Why are the Marthas the Marthas? We've had ten hours of TV, but we've only just scratched the surface of what could happen."

The finale of The Handmaid's Tale airs Wednesday June 14 on Hulu.

Emma Dibdin Contributor Emma Dibdin writes about television, movies, and podcasts, with coverage including opinion essays, news posts, episodic reviews and in-depth interviews with creatives.
This content is created and maintained by a third party, and imported onto this page to help users provide their email addresses. You may be able to find more information about this and similar content at piano.io
Advertisement - Continue Reading Below
More From Culture
You *Need* to Follow the 'Bling Empire' Cast on IG
Watch the Trailer for the New 'Euphoria' Special
Advertisement - Continue Reading Below
We've Getting a Season 2 of 'Bridgerton'
New Drama Movies That Promise to Move You
The Sexiest New Movies of the Year
A Look Back at Princess Anne's Life in Photos
Where Is the Cast of 'Gilmore Girls' Now?
'The Bachelor' Is Back!
Who Is "Queen" Victoria on 'The Bachelor'?
Matt James' 'Bachelor' Cast: Everything We Know