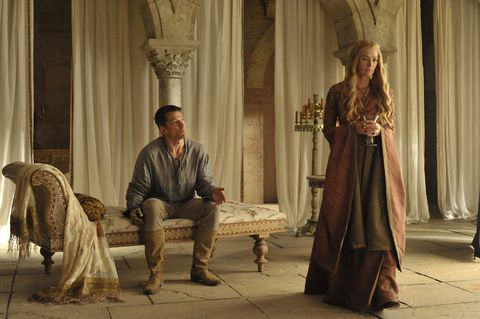 Your Sunday night couch-fest Game of Thrones viewing parties are about to get a major upgrade. Beginning January 23rd and ending January 29th, you can go see GoT in IMAX theaters—yes, that's the promise of Jon Snow in glorious, larger-than-life size.

If you nab one of the golden tickets, you'll not only be able to re-watch two episodes from Season 4 in the giant, digitally remastered format, but you'll also be privy to a special trailer for Season 5. Not to mention, you'll be a part of history: This will be the first time a TV series has shown in IMAX.

HBO has yet to reveal which episodes will be screened, but the info will soon be available on the IMAX website, where you can purchase tickets for the event being held at over 150 theaters nationwide.

In other GoT news, the younger version of Cersei Lannister has been cast for the much-anticipated flashback scenes. Tween actress Nell Williams will appear as the eldest Lannister child in the first three episodes of Season 5. We have but one question: Will she do that infamous, piercing glare justice?

You should also check out:
What the 'Game of Thrones' Cast Looks Like in Real Life

Lauren Valenti Associate Web Editor I’m the associate web editor at Marie Claire.
This content is created and maintained by a third party, and imported onto this page to help users provide their email addresses. You may be able to find more information about this and similar content at piano.io
Advertisement - Continue Reading Below
More From Culture
You *Need* to Follow the 'Bling Empire' Cast on IG
Watch the Trailer for the New 'Euphoria' Special
Advertisement - Continue Reading Below
We've Getting a Season 2 of 'Bridgerton'
New Drama Movies That Promise to Move You
The Sexiest New Movies of the Year
A Look Back at Princess Anne's Life in Photos
Where Is the Cast of 'Gilmore Girls' Now?
'The Bachelor' Is Back!
Who Is "Queen" Victoria on 'The Bachelor'?
Matt James' 'Bachelor' Cast: Everything We Know