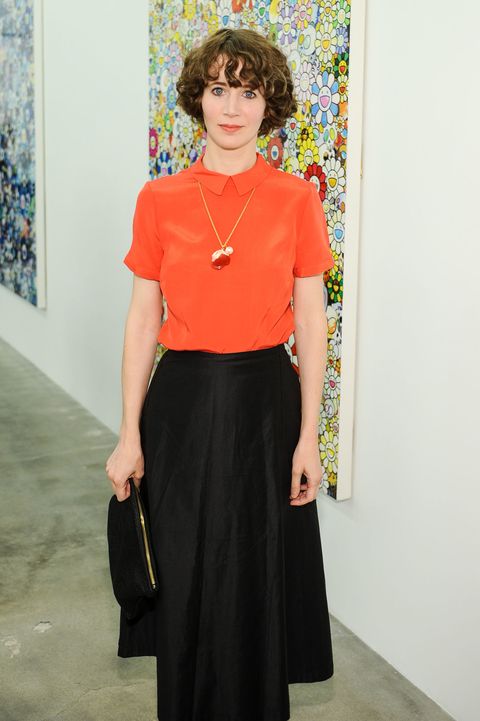 If you haven't seen You Me and Everyone We Know or read the collected short stories in No One Belongs Here More Than You, you're missing out. But now you have a new chance to redeem yourself: The creative genius behind them, Miranda July, has just released her first novel, The First Bad Man, proving she can do literally anything. Here, a quick look inside her brain.

Marie Claire: Without giving too much away, there's a very unexpected sexual relationship at the book's heart. What fueled it?
Miranda July: The fact that we are not necessarily ourselves, or even our own gender, in fantasies. [I wanted to explore the idea that] a woman could essentially embody a man, take on his sexual power in a way that transforms her life.

MC: You were pregnant while writing, and the story involves a birth. Did the baby have an impact?
MJ: I had the initial idea maybe six months before I got pregnant. I knew I was going to try to have a baby in the future, and I thought, Well, there's something new that I'll be able to mine. I actually left things blank in the first draft with notes: "I'll know something about this in a matter of weeks! No point in faking it now!"

MC: What kind of early feedback did you get?
MJ: The first people I shared it with were strangers. I was trying to get a sense of how this played—like screening a movie in front of an audience. Finally, I got comfortable enough to show it to other writers. My good friend Sheila Heti was a huge support. Her notes were essentially, "Spend about seven more years on it." Lena Dunham and I traded books, and she gave me like five specific and clear notes. It really surprised me. I completely used them.

MC: What else are you working on?
MJ: The First Bad Man Store (thefirstbadman.com). Objects described in the book are being auctioned online, and proceeds go to a women and children's charity. So if it gets crazy and people spend hundreds of dollars on a bobby pin, it won't seem like we're terrible people.

The Art of Defining the Relationship: A Man Explains His Side